The Arrangement by Mary Balogh 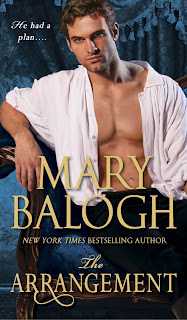 Rating: Mostly liked, although it sticks a little.
Did I finish?: I did, very quickly.
One-sentence summary: A blind viscount and a poor mousy girl enter into marriage with an unusual caveat: an agreement to live apart if they aren't happy together after a year.
Reading Challenges: E-book, Historical Fiction

Do I like the cover?: I don't. The ARC had a prettier version, of our heroine looking off at a pretty estate that I vastly preferred. This cover made me grateful I was reading it on my e-reader!

First line: When it became clear to Vincent Hunt, Viscount Darleigh, that if he stayed at home for the remainder of the spring he would without any doubt at all be betrothed, even married, before summer had properly settled in, he fled.

Why did I get this book?: Balogh has many fans and I like a historical romance now and then.

Review: I'm new to Mary Balogh's historical romances but I could see myself getting hooked. This one, the second in her The Survivors' Club series, features Vincent Hunt, Viscount Darleigh, a 20something vet of the Napoleonic wars who was permanently blinded (and temporarily deafened) during his first battle. (He is, however, still stunningly hot, and he has no visible scars.) For three years, after a rough convalescence, he's struggled with both his blindness and his new title, one he inherited after the surprise death of distant relatives.

Coddled by well-meaning female relatives, Vincent chafes at their attentions, but when his parents try to marry him off to a girl who acknowledges she's marrying Vincent only for her family, he flees. He goes to his childhood home in a country village, where his return sends ripples of curiosity and excitement. The village's local snobs descend upon him and try to trick him into marrying their horrid daughter, allowing him to walk into a dark alley with her in hopes that he'll propose when he learns of his error (and accidental besmirching of her reputation).

Instead, he's saved by the girl's cousin, Sophia Fry, who understands her relatives' designs and takes pity on the blind man. Grateful, Vincent chats politely with her, where they both admit their dream is to not marry, but live happily in the country, unbothered by people. The next day, Vincent learns that Sophia was tossed out in the night by her relatives who were angry at her meddling, and moved by guilt, he impetuously proposes an arrangement that he hopes conveys his gratitude and saves Sophia from a life of poverty: marriage to him.

The 'twist' is that Vincent promises if their marriage doesn't work after a year, he'll pay for her to have her dream. But he asks that she try, that they have marital relations and attempt an heir, but if they aren't happy in their marriage and there's no child, they can part ways as friends. Both agree they won't take lovers and neither will embarrass the other. Sophia, understandably tempted, agrees.

The rest of the novel is of their marriage and the wait to see just how, of course, they end up fully in love together.  A good deal of the book is about how Sophia helps Vincent manage his blindness so he feels less helpless as well as a significant portion dedicated to bolstering Sophia's self esteem. (We learn she's not horrifically ugly, but she's not pretty. In fact, I kept telling my wife she's very Jane Eyre or Anne Elliot -- plain but clever, suffering only from horrid relatives.)

I was pretty caught up in the two main characters and taken with their sweet and relatively turbulence-free marriage. Vincent was sweet and dreamy, and Sophia was clever and self-sufficient. My one hang up -- the reason this isn't an unabashed squee fest -- is that I found Balogh's handling of the sex and sexy times between them to be, well, uncomfortable. Sophia always gives consent, and repeatedly says she doesn't want Vincent to stop, but Balogh also always notes that she isn't an active participant or that she's passive. At one point, Sophia notes how sad she feels after sex. (!) Given that the character has no sexual trauma in her past, it felt particularly jarring and kind of made me feel uneasy. She wasn't coerced, but I'm not sure why the author kept telling us she wasn't into the sex.

That small hiccup aside, this was a fun read. It had very little of that maddening plot device where troubles arise only because the hero and heroine don't talk directly, but it was also pretty low on the conflict. (Which was fine with me.) The story is peppered with characters from either the previous Survivors' Club novel or forthcoming ones, and they're a motley crew. I'm definitely getting the first book and will likely read the next one, especially as Balogh has rather devoted fans.

With a smart and emotionally competent set of main characters, it's a fun read as summer winds down, especially for those who like Regency romances.

I'm thrilled to offer a copy of The Arrangement to one lucky reader! To enter, fill out this brief form. Open to US readers only, ends 10/11.