The Best of Daughters by Dilly Court 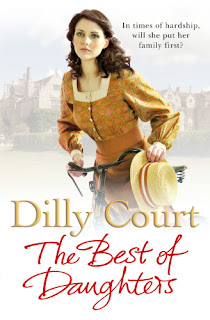 Rating: Okay.
Did I finish?: I did, very quickly.
One-sentence summary: Young Daisy Lennox finds herself about to marry her childhood friend just as the first World War breaks out and worse, she finds herself in love with the same man as her best friend.
Reading Challenges: Historical Fiction

Do I like the cover?: Eh -- it's super pretty but the figure on the bike is so super wrong -- the characters pointedly make fun of bike riding in the story and not a single one, male or female, hops onto a bike!

First line: In her frantic dash to escape the police Daisy had lost her hat and broken a heel off one of her shoes.

Buy, Borrow, or Avoid?: Borrow or buy, especially if you want an Edwardian/WWI-era historical fiction.

Why did I get this book?: I'm a sucker for British-y novels of the Edwardian, pre-WWI era.

Review: Opening in 1912, this novel follows Daisy Lennox, a grounded young woman from a wealthy family who chafes at her mother's Victorian sentiments and ceaseless criticisms. Newly involved in the suffrage movement, Daisy befriends a working class girl, Ruby, after clubbing a police officer with her parasol when Ruby is being beaten with a truncheon at a suffrage protest. What scandal comes of Daisy's action -- her assault is photographed and published in the newspaper -- is forgotten in light of a greater tragedy: the complete loss of the family's fortune due to a criminal act.

Nearly penniless, the Lennoxes move to their summer home, a small country house that borders the family seat of the Pendleton family. The Pendletons are long friends with the Lennoxes -- Rupert, the Pendleton heir, is close friends to Daisy and her brother Teddy, and matriarchs from both families fancy a marriage between Daisy and Rupert. Rupert even seems to to want it, while Daisy finds herself smitten by the village's bad boy handyman, Barnaby Bowman. Worse, Ruby, now established in the Lennox house as a maid, is involved with Bowman as well, and out of confusion, Daisy agrees to marry Rupert -- but war is declared before the ceremony can happen. (This all occurs in the first 80 pages or so; the novel is 480 pages!) Daisy finally gets her chances at independence when she joins the First Aid Nursing Yeomanry, and she soon finds herself in Belgium as she, the Lennoxes, and all of Britian struggles with the changes wrought by the war.

While I initially was all swoons with this book -- I thought it was going to be a Philip Rock-like novel of World War I, only more from the viewpoint of the women -- it really is more of a Hallmark movie kind treatment. While there's tension, drama, a love triangle, everything is fairly sanitized, and in the end, the good get their happily ever afters and the villain is humanely punished. This isn't a bad thing: sometimes you want a BBC costume drama without the gut wrenching reality of war, and this book feels super British, has war drama and war death but not war angst, and some romantic entanglements without embarrassing sex scenes.

I quite liked Daisy, although she did border on (or, let's be real, cross over to) Mary Sue territory, but I enjoyed her tight friendship with Ruby. Even though they don't quite pass the Bechdel test, their mutual desires for the same man never threatens their friendship, amazingly, and both act with grace, kindness, and aplomb throughout the book.

Despite the length, this book raced, helped by Court's willingness to zoom through long expanses of wartime (whole seasons pass by in a mere few paragraphs). The final wrap up was a little too quick for my liking, but was satisfying -- no loose ends! -- and was a lovely introduction to this new-to-me author. Fans of World War I stories, riches-to-rags-to-independence narrative arcs, and Anglophiles will enjoy this light but fun read.
* book reviews book rating - okay