The Gods of Heavenly Punishment by Jennifer Cody Epstein 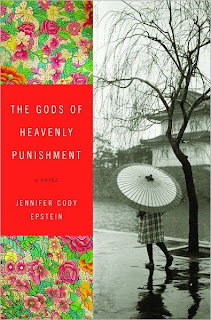 Rating: Liked a good deal.
Did I finish?: I did, in a matter of hours!
One-sentence summary: The interconnected stories of an American couple, an expat architect and his photographer son, children who love and fear their fathers, the beauty of Japan, and the impact of World War II on them all.
Reading Challenges: 7 Continents, 7 Billion People, 7 Books, E-books, Historical Fiction

Do I like the cover?: I do, very much -- the black-and-white photograph is reminiscent of a photographer character, and I'm rather grateful the cover is slightly more upbeat that some of the action!

First line: The climb felt almost arduous, the engine juddering and restarting four times during the creaking ascent up the Ferris wheel.

Buy, Borrow, or Avoid?: Borrow or buy, especially if you're a fan of Japan, World War II fiction, or complicated characters who are lovely and awful.

Why did I get this book?: I'm drawn to World War II narratives that aren't wholly from a US or British viewpoint and this one intrigued me.

Review: Historical fiction set during wartime is a favorite genre of mine (or, I suppose, a 'favorite' -- I'm not a fan of war) because there's a real focus on the ordinary, everyday people against a massive canvas. Jennifer Cody Epstein's novel represents what I most love about this genre: it's illuminating and educational without being cold, it's emotional in ways both familiar and alien, and it offers the reader a place to see herself in a situation she, hopefully, will never experience.

Set between 1935 and 1962, The Gods of Heavenly Punishment shifts between Japan and the US and follows a handful of people loosely connected by their pre-war lives in Japan (or, in one case, the US). Written in a vignette style, each chapter opens with a location and date, often jumping years ahead of the previous chapter. Epstein's skill is seen in that the narrative never felt rushed nor choppy, and the characters indeed changed during the unseen time.

There's Anton, a Czech expat and brilliant architect who loves Japan but betrays his soul's home to help the US war effort and his son Bobby, a sensitive photographer with his own secrets; Kenji, Anton's Japanese best friend and colleague, a visionary for Japan during the war; Hana, his beautiful but resentful wife and their daughter Yoshi, who witnesses betrayal, crime, and the horrific bombing of Tokyo. There's a young American pilot who joins 'Doolittle's Raiders', his smart wife and devoted younger brother.

Delightfully and disturbingly, Epstein's characters are human, warm and flawed. I liked Kenji despite myself - and his cruelties - just as I adored broken Hana. There wasn't a particular 'villain', per se, as most everyone was articulated in shades of gray. The descriptions of time and place put me immediately into the story, and I couldn't put this book down. The tension comes from needing to know who survives and at what cost; from the meager hope more than one ends up happy.

Refreshingly, the novel's focus on Japan and sympathy for the Japanese makes this an appealing read. While portraying atrocities on both sides, Epstein also evokes very complicated characters who hate and love their homelands, adopted or otherwise, who are selfish and selfless, who represent the innumerable dead.

While WWII is oft covered territory in historical fiction, I found Epstein's focus on Japan and the 1945 bombing of Tokyo to be fascinating (albeit horrifying). Much like one of the viewers at a photo exhibition, I assumed Tokyo was 'just bombed' but the reality is far more devastating (it was the deadliest raid of World War II, in fact).

I was strongly reminded of Jennifer Haigh's Baker Towers and Ursula Hegi's Floating in My Mother's Palm, both books I loved. This was a zippy read -- I finished it in a few hours -- but one that will linger with me.  Highly recommended, especially for those who enjoy World War II narratives or are interested in Japan.

I'm thrilled to offer THREE readers a copy of The Gods of Heavenly Punishment! To enter, fill out this brief form. Open to US/Canadian readers, ends 10/4.

Be sure to check out my interview with Jennifer Cody Epstein tomorrow for another chance to enter!