Banquet of Lies by Michelle Diener 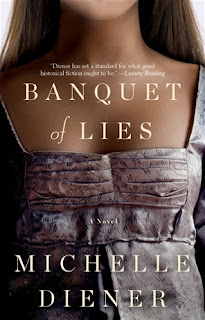 Rating: Liked a good deal, if not loved!
Did I finish?: I did, in a day.
One-sentence summary: A young noblewoman disguises herself as a French chef to hide from a murderer and deliver a sensitive political document.
Reading Challenges: Historical Fiction

Do I like the cover?: Alas, I don't -- I feel like I'm looking at a Barbie doll or mannequin -- there's something plastic-y about the model. Given the emphasis on food and cooking, it's a shame there isn't a more foodie cover!

First line: "I hear from the Countess de Salisburg that you collect recipes, Miss Barrington?"

Am... I grateful Diener includes recipes for some of the meals she mentions in her book?: YES, especially the unfamiliar Reine Claude jam. (Reine Claudes are also known as greengage plums, apparently, and now I am obsessed with finding one!)

Buy, Borrow, or Avoid?: Borrow or buy, especially if you love novels with a foodie bent.

Why did I get this book?: I'm in love with Diener's heroines.

Review: Michelle Diener is among my favorite historical novelists. I've read four of her five published novels and just adored them all -- and this one is no exception.

The novel opens in Stockholm, Sweden in February 1812. Giselle 'Gigi' Barrington is at a dinner party, explaining that while her father travels Europe documenting fairy tales and myths, she collects local recipes and, to the horror of the guest she's speaking with, makes them at home. ('With the servants?', gasps the woman.) After confirming she makes them only with her male chef, Gigi excuses herself to find her father -- and stumbles upon him being murdered.

Fleeing Stockholm with an important document, Gigi goes into hiding as a French chef to avoid being captured by her father's murderer. She takes employment with a young Lord, Jonathan Aldridge, a bachelor with a small household who lives near her childhood home. The chance to hide will give her, Gigi hopes, time to decide what to do with her father's secret document.

All this occurs in the first 50 pages; the remaining 300 pages are a mixture of sumptuous meals, amateur espionage, upstairs/downstairs shenanigans, and a little romance. I adored every page of it.

This book, as with Diener's other novels, features a heroine that charmed me from the first page. Competent without feeling anachronistically independent, Gigi is a heroine I loved to follow, and in this book, I was particularly captivated.

The narrative is speedy and warm -- I read this in about one day, unable and unwilling to put it down -- and despite a cast of about six players major players (Gigi, her employer, her downstairs colleagues, visiting nobles) I found it easy to keep track of everyone. Those sensitive to Mary Sue heroines might find Lord Aldridge's fascination with Gigi to be tiresome, but as I was equally enamored of her, it didn't bother me. I liked the romantic tension between them: they were technically peers but publicly of different classes.

Speaking of class, Diener manages that skillful balance of providing an entertaining story with an awareness of the social and cultural norms that shape and affect the story. As a woman of class and means, Gigi shouldn't be in her kitchen -- that's a job for the servants -- but it becomes a kind of twee game in the eyes of the ton if Gigi works with her male chef in recreating foreign recipes. That juxtaposition -- cooking as an art versus cooking as a kind of labor -- intrigued me and fans of cooking television will particularly enjoy this novel for that awareness.

Those who love Napoleonic-era romantic spy stories (I'm thinking Lauren Willig) will want to get this book as well as anyone who enjoys a good foodie novel. (Diener shares a number of the recipes from the novel, thankfully!) While there are some characters from The Emperor’s Conspiracy in this novel, it is in no way a sequel, and I enjoyed it without having read The Emperor’s Conspiracy. If you're new to Diener, get this book; if you're familiar with her, definitely pick this one up!

I'm thrilled to offer a copy of Banquet of Lies to one lucky reader! To enter, fill out this brief form. Open to US readers only, ends 11/8.