- October 24, 2013
Yesterday I reviewed Deborah Swift's rich novel of early 17th century Spain, A Divided Inheritance. I'm delighted to share this interview with Ms. Swift, who talks in wonderful detail about this book, her writing process, and what she's reading.  Be sure to enter the international giveaway for a copy of A Divided Inheritance! 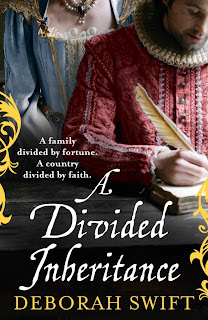 Was A Divided Inheritance the original title of your book?

No. Apparently it is very common for titles to be changed by publishers. The original title was The Swordmistress of Seville. The publishers felt that a reference to swords positioned the book either as a man’s book or as a fantasy, so we worked together to come up with another title and A Divided Inheritance was the result. There is a strong male character in the book as well as a strong female character so actually, I wouldn’t mind a few more male readers! I had originally been wary of anything with ‘inheritance’ in the title, although it was an obvious choice given what happens in the novel, because I didn’t want the book confused with A Dangerous Inheritance by Alison Weir. But I do think A Divided Inheritance works very well for the book, so I’m happy with it, even though it is a more static title than my original one. I have to say, publishers often know their markets and readers’ tastes better than the writer does. After all, Gone with the Wind was originally titled ‘Mules in Horses’ Harness.’

As you were writing A Divided Inheritance, was there a particular scene or character that surprised you?

I think all my characters surprised me at one time or another! I was surprised by the vigour of some of my ‘bit part’ characters. Often when writing, I am so concerned with the journeys of my main characters, that the minor ones can be a breath of fresh air and a delight. The reader too gets a break from the intensity of the main character’s experience. A Divided Inheritance is an epic book with action straddling England and Spain, so it covers a lot of ground - Elspet Leviston has to travel from staid Jacobean London to Golden Age Seville. So I loved writing the scene where the young King Phillip III of Spain bullies his priest, (I don’t usually write Kings or royalty, so I was surprised how much I enjoyed that) and I loved writing all the male characters training at the Spanish sword school, not to mention the handsome Senor Alvarez. I also got very fond of Husain, the little Morisco boy who wants to learn to fight like the men. He turned out to be awkward and badly-behaved at the worst possible time, just like real kids are! 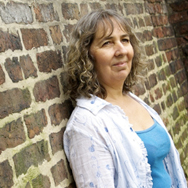 It’s a bit of a mystery to me too! It’s usually a snippet or thread I have read somewhere. I came across a picture in a book of two men fighting with rapiers on a strange grid-like pattern. The book was actually about the Golden Section, but these men were dressed in late Elizabethan or Early Stuart costume and the marking on the floor looked like a magical diagram. My interest piqued, I looked up in the back of the book where the illustration was from and discovered it was from a book called 'Academy of the Sword', a 1630 manual of fencing from that era that was still in print. So I got hold of the manual to find their training method was unique and quite extraordinary.

I had originally thought of doing something set around the Gunpowder Plot in London, with a lace-trader’s daughter. I was still fascinated by the fact that so many women were employed in the lace industry in the 17th century, yet it was completely controlled by men, who had no idea of fashion or interest in women’s clothing. Somehow the two stories wouldn’t let go, and I wove them together through an inheritance. It was only once I’d started researching that I found the real crux of the book, the forced expulsion of the Moriscos from Spain, which only Elspet who had lost everything in a botched inheritance, could understand.

One of the elements I'm most struck by in your books is the wonderful sense of place you evoke -- how do you do it?

That’s a lovely compliment! I think it is because as a writer I need to be anchored in the setting before my characters can feel real. For historical fiction the sensation of being there comes through describing equally the things that are the same as today and the things that are different. You need both to make it live in the reader’s mind – for example the sound of rain on roofs, which we all know the sound of, put together with slippery cobbles which we may not have any experience of but can imagine. I worked as a set designer for many years in theatre and TV so for me the background is not just background, but something that provides the characters with the most opportunities for action. Moving backgrounds are great – disintegrating buildings, people on horseback – if the background can shift or move like a character, so much the better.

In a previous interview with me, you mentioned Taiko Drumming as a hobby. How does music shape the way you write?

I need silence when I’m writing, and my ideal writing environment would be totally silent. (Ha! -I wish!) But I do love music and use it as part of my research to generate a mood or atmosphere. Whilst writing A Divided Inheritance I had to create a scene where the flamenco guitar moves someone to near tears, and another scene where one of the characters dances Flamenco. So I had to listen to a lot of Spanish guitar and Flamenco music to be able to find the right vocabulary to convey the specific flavour of the music. And I love all sorts of music in my leisure time, including the drumming – I have very eclectic tastes!

I was massively impressed by Kate Forsyth’s Bitter Greens, a historical set in the courts of Louis XIV, and telling the story of Charlotte-Rose de La Force - the woman who first wrote down Rapunzel.

My thanks to Ms. Swift for her thoughtful responses. You can learn more about her and her books at her website, and connect with her on Facebook and Twitter.

I'm thrilled to offer a copy of A Divided Inheritance to one lucky reader! To enter, fill out this brief form. Open to US and international readers, ends 11/8.