- November 06, 2013
Earlier in October, I read and luuuuuuuuuuurved the sexy/violent/awesome short story collection, Cars and Girls.  I'm super excited to share my interview with Evangeline Jennings, who edited the volume and has a story included as well.  She talks about this compilation, the next steps, and shares some about her writing process and current reads.  Be sure to check out the international giveaway! 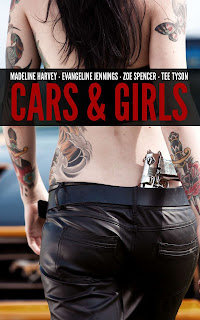 How did the collection, Cars and Girls, come about?  Did you have a theme first or the stories?

Half a story, I think. We'd been talking about doing a project together without coming up with any firm ideas. Then I started writing 'Crown Victoria', and about halfway through the first draft I had a lightbulb moment, Cars and Girls. So I put the idea out there and Tee and two other writers signed up straightaway. Then later two of them bailed. But Tee and I were well advanced on our stories, so I recruited a couple of friends and pretty much demanded they write something for us.

Cars and Girls is described as a 'femnoir' sampler.  How do you define 'femnoir'?

Last time someone asked me, I said it was a post-everything retro-noir in which the fairer sex gets real fucking dark. And that still sounds pretty good, but honestly, we’re making it all up as we go along. I'm a huge fan of noir, pulp fiction, and kick ass heroines, and the intention was to take those forms, push their boundaries, and subvert them by pensioning off the traditional action hero and writing stories that dealt with issues that mattered to us. While having fun with the genre and messing with the rules. Is that any kind of answer?

After this volume is another, Girls And Boys, which is described as a 'sequel of sorts to Cars and Girls', and following that, a full length volume, The Vegas Thing, featuring characters from two stories in Cars and Girls.  Was this an intentional progression?

Not at all. As I said, we're making it up as we go along. Girls And Boys was originally planned to be a collection of "noirotica" and we had a dozen writers signed up to contribute to that but in the event it didn't work out - too many egos, that's me being polite - so we ended up recycling the name.

What happened was, Maddy and Zoë got the idea of writing a novel together featuring Etta and Emily, the main characters from their Cars and Girls stories, in one big mad adventure - that's The Vegas Thing. When they asked Tee and me if we would edit and publish it for them, I said, Yes, but only if you prove you can write more about your characters before you set out on a full-blown novel. And since we were all working on erotica at the time, they decided to write an "erotic bridge" between the end of their Cars and Girls stories and the start of The Vegas Thing. That's now Girls and Boys. It's only a couple of short stories, maybe fifteen thousand words in total, but it does have a really good cover.

The original master plan, such as it was, had been to follow Cars and Girls with a second volume called More Songs About Cars and Girls. But I got distracted - squirrel! - by another idea,  a collection of YA short stories called Heathers that we'll be publishing before the end of the year. And so More Songs has been delayed until early next year. It's actually pretty much finished - we're waiting for one more story - but we've still got all the final editing and production work to do. On the whole, More Songs is a little less extreme than the first collection. Possibly. Well, there's less guns. 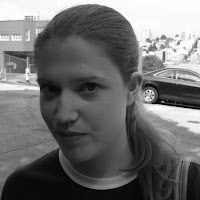 You have one story in this collection, 'Crown Victoria'.  Was there anything that surprised you as you were writing it?

My stories always surprise me. Mainly because I never plan anything. Something gives me half an idea and off I go. I suspect if they didn't surprise me, they wouldn't be any good.

Without wanting to give anything away about the story, there are at least four things in 'Crown Victoria' that particularly surprised me as I was writing it. Three of them are major plot points. The other is my Dixie Chicks joke. I planted the seed for it early on without realizing what I'd done but when I got to the punchline, maybe ten thousand words later, I was so pleased with myself that I probably did a little song and dance.

God, I love that joke.

A complete retelling of Enid Blyton's Five On A Treasure Island, when I was seven or eight. If you want something a little more grown up, my first piece of original fiction is my great unpublished novel. It's called Puta and the plot is more or less Kill Bill meets The Girl With The Dragon Tattoo. Only better and different. It's 124,000 words long and Harper Collins spent six months looking at it before deciding it needed to be two separate books - which surprised me because I had planned for it to be the first volume in a trilogy. So one day soon I have to re-read Puta and decide what I want to do.

No. Except I can only write when it's quiet. No TV, no music, no kids demanding I take them out for ice cream.

Sleep. But more often than not, I have to work for the Man. Or take the kids out for ice cream.

Thankfully, yes. A brand new book called Bad Bishop by Irene Soldatos, that was published at Halloween. Before that it was probably Wodehouse, Trollope, or Somerset Maugham.

My thanks to Ms. Jennings for her time and answers. You can learn more about Pankhearst and their forthcoming books at their website, and connect via Facebook and Twitter.

Evangeline and Pankhearst have generously offered THREE copies of Cars and Girls to my readers. To enter, fill out this brief form. Open to US and international readers, ends 11/22.