A Rogue for All Seasons by Sara Lindsey 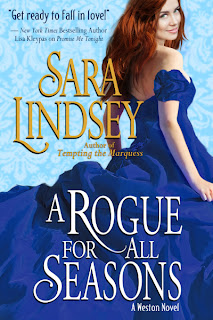 Title: A Rogue for All Seasons
Author: Sara Lindsey

Rating: Liked a great deal.
Did I finish?: I raced through it gleefully!
One-sentence summary: A wallflower facing spinsterhood finds herself in a mock courtship with a stunning rogue when both realize they want their courtship to be real.
Reading Challenges: E-book, Historical Fiction

Do I like the cover?: I'm not wild about it, but I'm actually not really a fan of historical romance covers.

First line: For a girl of only eight years old, Diana Merriwether was very good at hiding.

Why did I get this book?: A woman I met at a friend's wedding is friends with the author, and she asked if I'd be open to connecting with the author.

Review: I'm a sucker for happily ever afters, but I'm picky about the journey. When a historical romance doesn't work for me, it's usually because the obstacles are created due to lack of direct conversation or there are misunderstandings so outrageous they beggar belief.  When historical romances do work for me, they feature a hero and heroine who are learning about themselves as much as they are learning about each other, and the challenges in their courtship are dramatic and emotional without being unhealthy.

This book is one of those that work.

Henry Weston comes from the blessed Westons -- wealthy, good-looking, good-humored.  While his sisters have fallen happily into matrimony (Lindsey's two previous novels), Henry is just as happy to keep up with his string of women and fun-loving life.  Except, he's kind of not.  When he finally acknowledges he has an aspiration -- to breed horses -- he learns that the owner of the famed stud he plans to purchase is afraid Henry will turn it into a brothel or some pleasure palace.  To purchase the stud, Henry has to prove he's a real gentleman.  Henry's parents are agreed; if Henry can find investors for half the cost, they'll front him the other half.

Diana Merriwether is the granddaughter of a duchess, facing her seventh season single.  Resigned to being a spinster, Diana has guarded herself from all impropriety due to the scandal of her parents' separation more than fifteen years earlier.  Wounded, too, from her father's rejection of her and preference for her brother, Diana is certain that love is fickle.  She wants none of that nonsense.

After being encouraged to be nice to Diana for years, including being urged by his mother to dance with her at least once if they're at the same event, Henry offers Diana an odd bargain.  If she'll enter into a mock courtship with him to make him seem as if he's the reformed gentleman -- for who but the blameless would Diana Merriwether court? -- he guarantees his interest in her will draw other suitors, and she may 'throw him over' at the end of the season for her real choice.

You can imagine the shenanigans that ensue from this arrangement.  Refreshingly, while there are some moments of miscommunication that do add conflict, Lindsey doesn't turn this into an agonizingly long wait for Diana and Henry to just admit their feelings.

To my surprise and delight, the novel's end doesn't come with their inevitable to marriage, but their growth as a couple learning to trust each other and behave honestly.  Diana doesn't trust that she's loveable.  Normally that's a trope I loathe in a heroine but Lindsey articulates it in a manner that makes sense, given Diana's past, and when Diana gets over it, it's so very satisfying.  (And kind of made me teary, because, yeah, I've got my own anxieties about my loveable-ness!)

Now, for the important part: the sex is hot.  They're into each other, there are no weird hang ups about liking sex or their bodies, Lindsey doesn't use any uncomfortably odd euphemisms for body parts, and happily, it's more than just missionary style.  Those who are shy or prude-ish might be uncomfortable but the sexy scenes still feel romance novel-y rather than erotica-y.

I was stunned to discover upon finishing this book, that this is self-published. The quality of the writing, the editing, and the e-book's formatting had me assuming this came from a traditional publisher. Kudos to Lindsey for that.

I'm absolutely eager for another book from Lindsey and can see why her fans keep calling for more of the Westons.  They're a charming bunch, and I'm smitten.  If you're facing hectic holidays, consider adding this one to the queue for fun, engrossing escapism.
* book reviews book rating - liked