Daughters of the Nile by Stephanie Dray 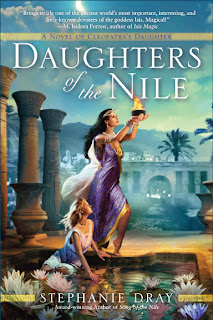 Rating: Looooooooooooooooooooooooved like a loving thing!
Did I finish?: Oh yeah -- I even reread the second book in anticipation.
One-sentence summary: The final chapters in the life of Cleoptra's daughter, Queen Cleopatra Selene of Mauritania, and her battle with the Emperor Augustus.
Reading Challenges: Historical Fiction

Do I like the cover?: I do - so dramatic and lurid!

First line: I will never see my mother's Egypt again, I think.

Why did I get this book?: Because I adore Dray's writing and this series is electrifying!

Review: Wow. Wow. It's been a few days since I've finished this one, and I'm still struggling with how to articulate just how much I adored this book. Loved it so much I want to just yell at everyone in all caps to convey my deep passion for it!

Daughters of the Nile is the final volume in Dray's trilogy about Cleopatra's daughter, Cleopatra Selene. (I've reviewed both the previous volumes, Lily of the Nile and Song of the Nile.)

At this point in Selene's journey, she's begun openly resisting Roman emperor Caesar Augustus in her endeavor to fully own her life.  After struggling with the heavy weight of her family's name and legacy, the lure of ruling Egypt always tempting her, Selene has paid for her ambitions -- and what was just her burden is now affecting others: her husband, King Juba, her daughter, Isadora, her niece, Phythodorida.  But pursuing her own dream isn't easy nor gifted to her by Augustus, and as with the previous novels, Dray doesn't coddle the reader nor hold back on the brutality, cruelty, and gutting reality of life for women in this era.

This is a historical fantasy, technically, but Dray's use of magic in this series is subtle and understated and felt so natural that I never noticed it.  The characters aren't using magic to enchant people or get work done; like everything else in this series, using magic comes at a considerable cost, and the decision to evoke magic is weighed carefully.

Dray's storytelling skill is just marvelous, and seen not only in this book but in the trilogy over all. Selene's life is one of tragedy, and yet, as a heroine she is dynamic, determined, and dedicated toward getting what is hers. Dray artfully conveys Selene's growth, from a young prisoner of war in Lily of the Nile to a teenaged monarch and mother struggling with demons and her desperate desire to win at all costs in Song of the Nile to, finally, a woman fully realizing what must be sacrificed to save what she loves in Daughters of the Nile.

There are no static characters in these books; everyone changes, grows, develops, and their actions make complete sense.  Even the twisted, torturous Augustus -- a monster -- had moments of humanity, and had characters who loved him as much as they loathed him.

And oh, how I loved these characters.  Dray is as hard on everyone else as she is on Selene and to say Dray gutted me is an understatement.  As I was finishing this book, my wife woke to find me sobbing -- shoulder-shaking sobs! -- at 3am.  I had my heart broken about ten times in this book, and the way Dray built up, drew out, and brought all that pain and pathos to life was just astounding.  I loved every agonizing minute.

Here's the bottom line: Daughters of the Nile might be one of the best concluding volumes in a series I've ever read, and Dray's Cleopatra Selene trilogy among the best historical fiction trilogies out there.  It has everything for hungry readers of historical fiction: rich and atmospheric details that evoke a foreign time and place, a standout cast of characters that live and breath, resonant themes and deep emotional interactions that are impossible to shake off, and some deliciously disturbing soap opera-y elements in case you were feeling safe.