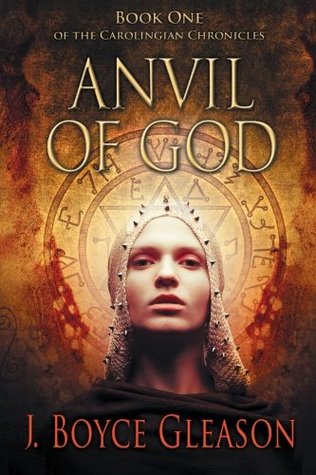 Rating: Loved.
Did I finish?: Yes, I inhaled this one!
One-sentence summary: In 8th century Europe, four heirs battle each other for freedom, power, and happiness after the death of their powerful patriarch.
Reading Challenges: Historical Fiction

Do I like the cover?: I'm on the fence. At moments, I really like it, and at others, I feel like it gives the novel a Dan Brown-y feel (which it isn't!).

First line: "God's will be done," Carloman whispered as the forward line closed on the enemy.

Why did I get this book?: Saw so many great reviews of it, I wanted in on the excitement!

Review: On the surface, this isn't precisely the kind of historical fiction I'm drawn to, a medieval tale of fathers and sons, conflict and war, a kingdom divided. But after seeing one rave review after another for this one, I jumped on the chance to review it, and I'm so glad I did.

Opening in 741, the novel follows Charles Martel (grandfather to Charlemagne) in his last days. Dividing his kingdom among his three sons Carloman, Pippin, and Gripho, Charles thinks to quell rebellion and infighting. Instead, pious Carloman chafes that the more pagan-minded Gripho has land, while Pippin is preoccupied with his mistress. Charles' daughter, Hiltrude, grew up indulged by her father to the point that she trained with a sword while wearing Saracen armor, but despite her wishes, is betrothed to a foreign prince to shore up his loyalty. Upon his death, Charles' plans are for naught as his children strike out on their own, and the resulting conflict has enormous implication.

This novel reads with the rich, lurid, dramatic, and soap opera-ish intensity of Marion Zimmer Bradley and Philippa Gregory. In addition to the battle between siblings, there is a war of religion, and Gleason's use of pagan spirituality is what lead to my Bradley comparison (although this is a decidedly non-magical novel). I'm not one for detailed descriptions of battle, especially in a book filled with battles, but Gleason marvelously described the events without making it a blur of weapons and tools and gore.

At 405 pages, this is a beast, but despite its size, the novel raced. Gleason's characters were distinct and huge with personality while the plot was, well, plotty! Shifting between the brothers and Hiltrude, Gleason kept hold of his story while stoking drama and tension. (There is a slight whiff of an anachronistic heroine in Hiltrude, the sword-fighting noblewoman, but I have to admit, I so liked how he handled her, her father's indulgence of her, and how she behaved through the novel that I didn't mind she danced the line between historical and wholly fictional.)

I have to admit I did give a small eye roll when I saw this is the first in a trilogy. Before starting, I thought surely there would be no more story to tell -- but I was wrong. Nothing dragged nor felt extraneous in this book, and when I got to the book's end, I could have easily dove into another 400 pages just to remain with everyone.

There are nice extras to help the reader -- a small map, a family tree, and chart detailing which noble belongs to which locale. Gleason's Author's Note is 9 pages long and footnoted, and covers the plot line, characters, and places in the book.

Although this is the first in a trilogy, I very much found it a stand alone novel as most everything is resolved (to a point), so one can walk away satisfied or, like me, be impatient for the next book. Fans of medieval fiction will absolutely want to get this one as well as those who enjoy the court/royal setting.

I'm thrilled to offer a hardcover copy of Anvil of God to one lucky reader! To enter, fill out this brief form. Open to US readers only, ends 2/14.