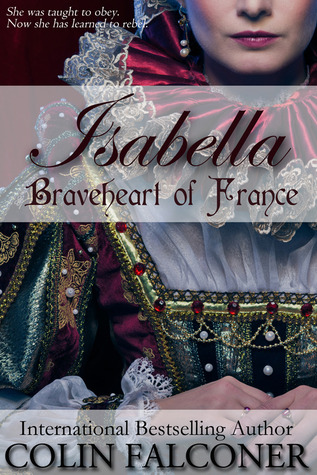 Rating: Liked a good deal.
Did I finish?: I raced through it.
One-sentence summary: The life of Isabella of France, a 14th century queen of England.
Reading Challenges: E-book, Historical Fiction, What's In a Name

Do I like the cover?: I do. I don't think the costume is accurate to the era, but whatever, I like the jewels.

First line: You will love this man.

Why did I get this book?: Very curious about medieval royalty and I've long wanted to read one of Falconer's novels.

Review: I went into this book having no idea who Isabella was nor even when this book was set. (In my copy, the first time a date appears is Chapter 16.) Despite that small hindrance, I had no problem getting into the story; Falconer plunges the reader into a world of arranged marriages, foreign courts, and royal intrigue with a clever, observant, and fierce heroine I loved from the start.

Married at 12 to the handsome Edward, Isabella finds herself with a kind but disinterested husband. Citing her age as a his reason for avoiding her bed, it comes clear to the reader, and soon, Isabella, that Edward's favorite, Piers Gaveston, might be more than just a boon companion. Hungry for Edward's affection and time, Isabella strives always to be his ally, urging him toward greatness rather than indulging his whims. But she grows increasingly frustrated when Edward replaces Gaveston with another unpopular favorite and his focus remains always on personal gain rather than what is best for the country.

I was captivated from the first page of this brisk story. Written in present tense, there's a taut immediacy to the narrative that had me racing through it, eager to find out what would happen to Isabella and her rather useless husband. At 218 pages, this is more a novella than a novel, and while I wanted more, this is a coherent and complete story. It's a lean story, too, with hints of detail to evoke time and place, sparse descriptions, a sort of 'modern' feel that I loved. (Gruesome, too, since medieval punishment was not neat nor kind.)

My copy didn't include an Author's/Historical Note, which I would have liked, but otherwise, I have no complaints about this book. It was a fascinating introduction to a British monarch I was unfamiliar with and is the kind of read that colors one's perception, I think: any future reads featuring Isabella will be compared to this book and Falconer's articulation of her.

Brisk, exciting, and zippy, this is a fantastic read for those who want something engrossing without a huge time commitment (I love chunksters, but sometimes, size can be daunting!). Fans of royal intrigue will enjoy this less-written-about era and ruthless heroine.

I'm thrilled to offer an e-book copy of Isabella to THREE lucky readers! To enter, fill out this brief form. Open to US and international readers, ends 2/7. Only one entry per person.