Girl on the Golden Coin by Marci Jefferson 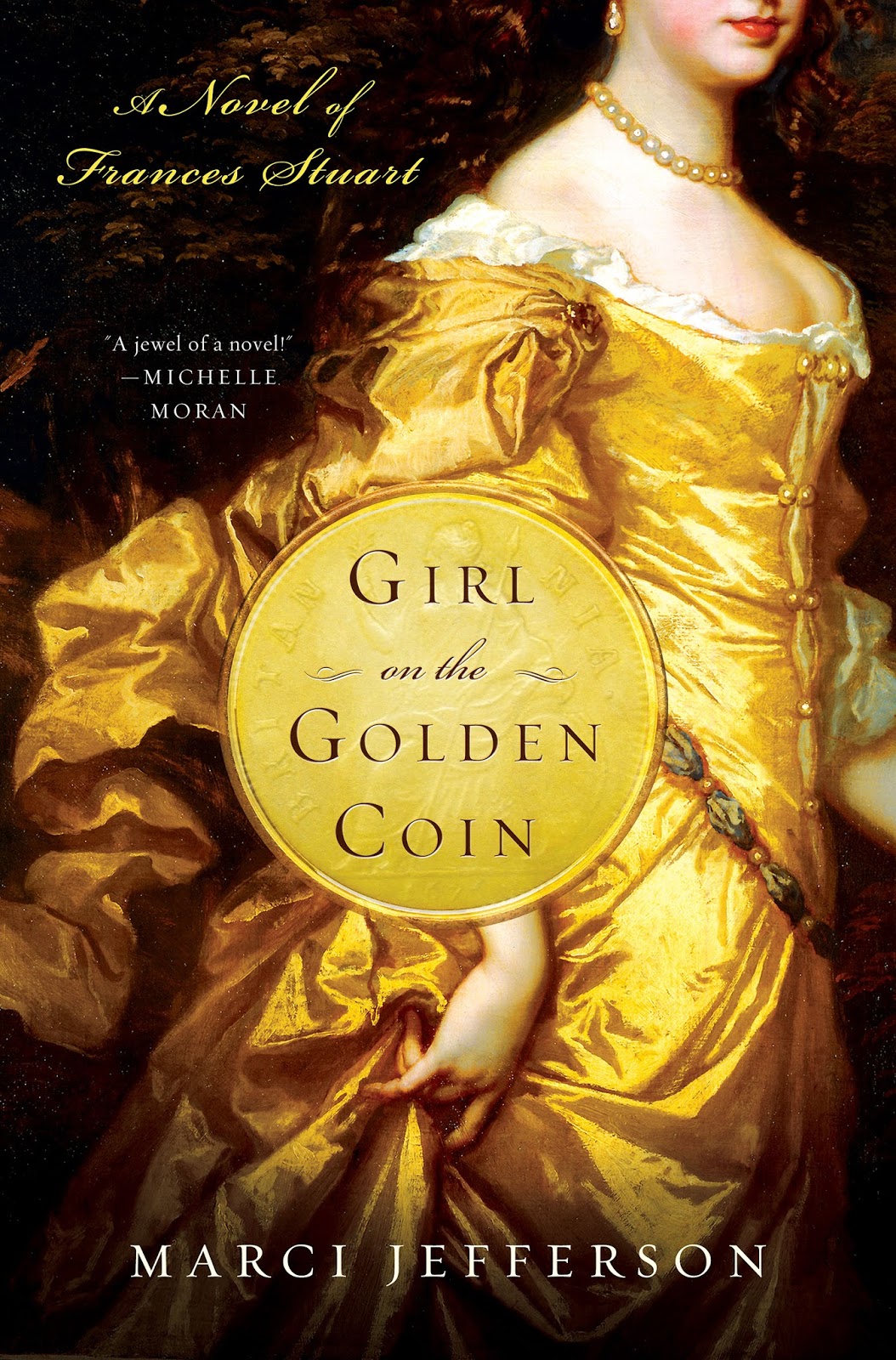 Do I like the cover?: Yes. I uh-dore it, especially because it is a portrait of the historical Frances Stuart, our heroine.  How often does that happen?

First line: Fireworks from St. James's Park lit the night sky as I stood outside my home, Richmond House, the finest at Whitehall Palace, and waited for one of my oldest friends.

Why did I get this book?: Hardcore hist fic yearning.

Review: I have been dying to read this book since last June, when I hosted the author on my blog ahead of the Historical Novel Conference. Since then, there's been a lot of buzz about this book because one, the author is sweet and adorable and I just want to eat her up with a spoon; and two, the novel has a staggeringly gorgeous cover (click the image for the full-blown hi-res version).

As it turns out, there's a pretty fabulous story here, too!

Set between 1661 and 1688, at the height of the Restoration in Great Britain -- the rule of Charles II -- the novel is narrated by English noblewoman Frances Stuart. Frances is part of a group of exiled English royalists holed up in France, serving the Queen Mother there while hoping for an invitation to join the court in England. When her great beauty attracts the attention of King Louis XIV, she becomes a pawn in a greater political struggle for power, as she is essentially ordered by both Louis and the Queen Mother to become mistress to the 'merry monarch', Charles II.

Frances could have been portrayed as uncomfortably priggish or judgmental, but instead appears to be a very human woman: tempted, conflicted, concerned with both her honor and with the yearnings of her body.  She made the entire novel for me -- her 'voice' was warm and real -- and I loved every minute with her.  This is a coup for Jefferson, because ever since reading Susan Holloway Scott's Royal Harlot, her novel about Barbara Palmer, I've had a soft spot for the woman -- and in this book, I wanted to slap her for being so awful to Frances.

The historic details here are rich without overpowering the story and the pace is very fast -- Frances' life is full of excitement and drama. There are some sexytimes, too, but those scenes fit with the story and didn't feel egregious or outrageous to me. My only complaint is that I would have liked a little more lingering near the end -- the novel felt rushed at times, especially with Charles' death -- but otherwise, I was sucked in from the first page.

There's a full six pages of Who's Who at the novel's open, for which I'm deeply grateful, and a four page Author's Note.

A delicious debut, Jefferson's novel is a delightful introduction to a tempting heroine and a rich story of a wild, tumultuous era. In an interview with Megan of A Book Affair, Jefferson says she "became obsessed with the desire to do for the Stuarts what Philippa Gregory had done for the Tudors" and I think she's done that! Here's to more Stuarts, and to more from Jefferson.

I'm thrilled to offer a copy of Girl on the Golden Coin to one lucky reader! To enter, fill out this brief form. Open to US readers only, ends 3/7. Be sure to return on 2/20 for an interview with the author and another chance to win.
* book reviews * giveaways book rating - loved