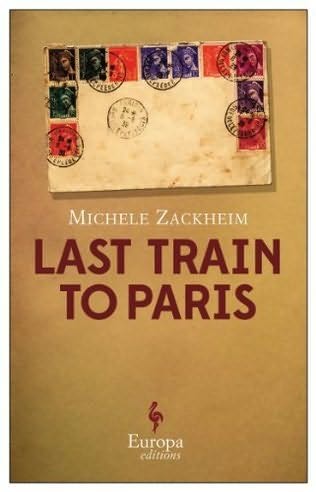 Rating: Didn't really like.
Did I finish?: Nope.
One-sentence summary: A woman reflects back on her time as a journalist in pre-World War II Europe, which includes a love affair, the murder of a family members, and her struggles with her mother.
Reading Challenges: Historical Fiction, What's in a Name

First line: Some days, I'm too angry for words.

Buy, Borrow, or Avoid?: Borrow if you're a fan of World War II narratives.

Why did I get this book?: I like Europa Editions usually as they have unique angles or voices in fiction.

Review: I don't know what's wrong with me but I really ought to have loved this book.

Told in first person by Rose 'R.B.' Manon as she looks back at her time in Europe before World War II started, the novel is filled with action yet has an aloof, distanced narrative style that really left me feeling cold and detached. There are so many disparate themes and threads in the plot I couldn't find anything to really hang onto, and I didn't feel any sort of connection with Rose.

Born to a Jewish mother who denied her heritage and a Catholic father, Rose grew up in Nevada and wished to live in New York City where her parents were from.  In her twenties, she moved to Paris to be a journalist, covering Berlin and the rise of Hitler in Germany.  Tragedy strikes first when Rose's actress cousin Stella is murdered and later when Rose's lover is caught up in the violence in Berlin. Her strangely adversarial relationship with her mother comes to a head, in a manner, during the trial of her cousin's murderer. Through her journalistic work, she brushes up against famed European thinkers and writers, like Janet Flaner and Colette, which shape her as well.

Despite the rich potential of this novel, I just couldn't get into it. The various elements felt disjointed and distracting -- was it a novel of World War II? a kind of murder mystery? a coming-of-age and a mother-daughter tale? -- and I wasn't wild about the writing style, which felt so awkward and clunky, like:


Stella, near tears, was sitting in Clara's living room. "Damn this Hitler character," she said. "He's making us all so nervous."


The public was fascinated: that monster, who had no papers, crossed the frontier into France, killed a woman -- and almost got away with it.  It was a metaphor for what the German war machine was threatening across Europe -- except that the Germans were indeed getting away with it. (p105)

I started this book at least six times since I got it in December but it just didn't work for me. However, others have really enjoyed it, like Anna of Diary of an Eccentric (her review) so do check out the other blogs on tour for their thoughts.  Those who like novels about World War II will want to consider this one for sure.

I'm thrilled to offer a copy of Last Train to Paris to one lucky reader! To enter, fill out this brief form. Open to US readers only, ends 2/21.