Under the Wide and Starry Sky by Nancy Horan 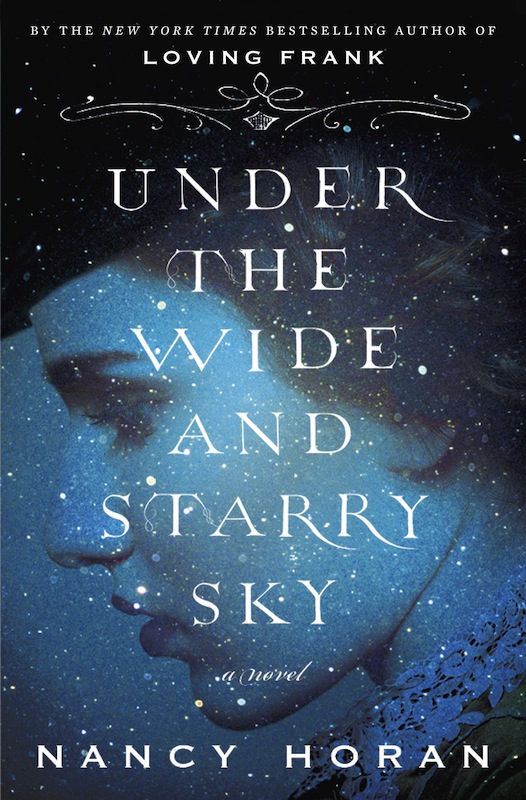 Title: Under the Wide and Starry Sky
Author: Nancy Horan

Rating: Liked.
Did I finish?: I did!
One-sentence summary: The story of the American woman who would win the love of Scottish writer, Robert Louis Stevenson.
Reading Challenges: Historical Fiction, What's In a Name

Do I like the cover?: Love the cover -- so striking!

First line: "Where are the dogs?" Sammy asked, staring up at her.

Why did I get this book?: I'd heard nothing but good things about Horan's previous novel.

Review: I'd long been interested in Nancy Horan having heard nothing but raves for her first novel, Loving Frank, and I'd been long eying this book.

Opening in 1875, the novel follows American Fanny van de Grift Osbourne, who has left California with her three children after realizing her husband wasn't going to give up his mistresses. A beloved nanny, heartbroken at their departure, paid her own passage to join them, and Fanny and company move first to Belgium, then France, so Fanny and her daughter Belle can pursue an art education.

After devastating tragedy, Fanny meets a Scottish writer, Robert Louis Stevenson, ten years who junior, who is immediately smitten with her. Their love affair turns into marriage, a life of Bohemian artists and authors, exotic travel, petty squabbles and great passion.  I'm being vague because there's no point in recounting the details; clocking in at 496 pages, this beefy chunkser does the heavy lifting.

Horan's novel represents what I most love about biographical historical fiction: fascinating people made real, their decisions and choices explored and imagined, given emotion. I was immediately charmed by the ambitious Louis, as Stevenson preferred to be called, but felt most for Fanny. Being a woman with ambition in the 19th century was no easy thing, and though she found a kind of freedom in Europe after leaving her philandering husband, once she became Louis' wife she had other obligations that squelched her dreams.

Horan articulates both Fanny and Louis with tender warmth, so even when they behaved badly, I still cared for them. While the pacing of the book occasionally felt slow to me, I was gripped by their story. Horan's use of historical details was effortless, and her narrative had hints of the philosophical to it, which I adored. I've read nothing set in 19th century South Pacific, so the sections in Samoa were fascinating -- those who enjoy armchair travel will want this book!

Rich, dense, emotional, and stirring, Horan's novel is a meaty exploration of marriage, creative endeavors, and the price of partnership. Those who love novels about the unknown women behind great men will want this one, as well as anyone who's suffered through (or enjoyed!) studying Stevenson in school. Strongly recommended.

I'm thrilled to offer a copy of Under the Wide and Starry Sky to one lucky reader! To enter, fill out this brief form. Open to US readers only, ends 3/7.