While Beauty Slept by Elizabeth Blackwell 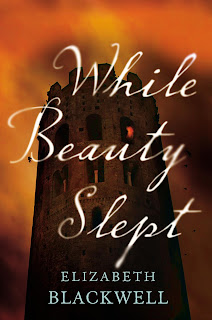 Rating: Liked a great deal!
Did I finish?: I did, in one day.
One-sentence summary: A young serving girl recounts her life with the princess who would be known as 'Sleeping Beauty', and her role in the girl's life -- and legend.
Reading Challenges: Historical Fiction

Do I like the cover?: I do -- it's rather dark and 'masculine' for a Sleeping Beauty retelling!

First line: She had already become a legend.

Why did I get this book?: I love a good fairy tale retelling.

Review: I raced through this book -- I think I started it around noon and finished it before dinner time -- and it was a satisfying, emotional read. I love fairy tale retellings, and Blackwell's is solid.

I've been struggling with this review only because I don't know where to start with the squeeing and gushing. I actually read this book in December and my estimation of has grown since then. (Also, this is a good reminder to never put off reviews!)

Blackwell's setting is an ambigu-medieval world, vaguely western European. (I will say, I struggled with identifying this has a historical novel -- historical fantasy, maybe?) When a plagues decimates her farm village, young Elise flees to the royal center to find her mother's sister, a prosperous merchant, who places her in a job at the palace. Due to kindness, loyalty, and the help of the King's imperious sister Millicent, Elise rises through the ranks to find herself serving Queen Lenore.

Unable to conceive, the queen has taken to consulting with Millicent, who is rumored to be a witch who practices the dark arts. When the queen gives birth to a healthy baby girl, Millicent makes a power grab that causes her to be banished from the kingdom -- and in revenge, Millicent utters a curse on the young infant. Panicked, the king and queen do everything in their power to protect their much wanted heir, including destroying all the spinning wheels in the kingdom. But as Rose grows, it becomes harder to remember what was so feared in Millicent, and then, of course, the worse happens.

Despite the Sleeping Beauty plot frame, I'd argue this is really a coming-of-age novel. Elise grows up in a complicated world of protocol where friendships are easily bruised by betrayal and romantic entanglements cost more than one's heart. A medieval career woman, in a way, Elise is dedicated to the royal family, potentially at the expense of her own happiness. I was frustrated with Elise while reading -- I wanted her to behave differently at times -- but a few month's distance from my active reading I feel nothing but like and admiration for her.

The joy of this novel is the balance Blackwell finds in creating an engrossing original story that has all the elements, icons, and touchstones of the famous fairy tale. It is both new and familiar. The bones are Sleeping Beauty, but the meat of the story is a creative, emotional, and haunting tale of a woman who hopes to gain some measure of happiness in finding that for those she loves. Un-put-down-able and unforgettable.

I'm thrilled to offer a copy of While Beauty Slept to one lucky reader! To enter, fill out this brief form. Open to US readers only, ends 2/28.