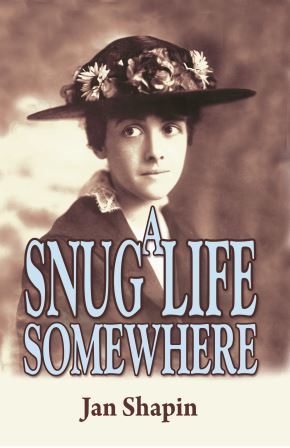 Rating: Liked a good deal.
Did I finish?: I did!
One-sentence summary: A woman in the early 20th century shares her life and experiences with the labor movement, Belshevik revolutionaries, and meeting J. Edgar Hoover.
Reading Challenges: Historical Fiction

Do I like the cover?: Mostly -- I'm not wild about the font but I do love the portrait of the woman -- it makes me think a bit of our heroine, forcing herself to pose.

Why did I get this book?: I love novels about the labor movement, and erroneously thought this was set in Everett, MA -- I always like local hist fic.

Review: Opening in 1916, this rich novel follows the life of Penny Joe Copper, a young woman from Everett, WA.  Born into a union family of shingle weavers, Penny Joe's life is dominated by the labor movement when first her father, and then her brother, become heroes of the cause. She's swept into the movement herself by accident and the machinations of Gabe Rabinowitz, a ruthless organizer, and finds herself going from being a photo op to revolutionary, almost without being aware of it. But as she grows up and learns to separate the wants of others from her own desires, she finds some measure of happiness and independence.

Everything about this novel was delightfully unexpected.

Shapin's narrative style has character, but doesn't distract from the story. Told in first person, we're plunged into the drama from the first page, but as with distraught narrator, the tale doesn't unfold completely neat and chronological. Penny Joe flashes back to her childhood, then jumps to the present, then shifts to the immediate past. This might sound confusing but in the flow of the story, feels quite natural -- not jumbled precisely, but wonderfully ramble-y -- and the whole of the book has the feel of a colloquial memoir.

Penny Joe's grief is complicated and heavy; it doesn't dissipate easily nor resolve itself within a chapter. She's an appealing heroine who is flawed in the kind of way that makes one want to keep reading; she's silly and brave, passive and active, and wholly realized.  The 'great love' plot thread is surprising and wonderfully unlikely, nothing I've read before, and kept what is often a tiresome trope interesting and fresh.  The secondary characters are deliciously complicated, hard to love and hard to hate in equal part.

I couldn't stop thinking about this book while reading and didn't want to put it down. For those who like novels of American history, especially early 20th century history that isn't focused on the World Wars, this is for you.  Fans of coming-of-age stories might find Penny Joe's long journey intriguing and gripping.
* book reviews book rating - liked