Never Be At Peace by M.J. Neary 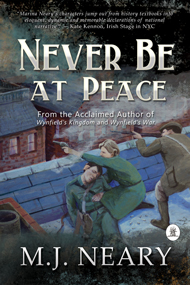 Rating: Liked a good deal.
Did I finish?: I did!
One-sentence summary: A novel of early 20th century Irish revolutionary Helena Moloney and the tumultuous circumstances of her life.
Reading Challenges: E-book, Historical Fiction

Do I like the cover?: I'm ambivalent -- it fits the novel, but isn't what draws me in.

First line: Katie Barrett would sell her soul for a gulp of fresh air, but there wasn't any inside the filthy store on Ship Street where she had been marched along with the handful of the Irish Citizen Army survivors.

Why did I get this book?: It's a fascinating era I haven't seen featured in hist fic before.

Review: Set between 1903 and spanning through to 1940, this rich novel follows Helena Moloney, a Dublin-born woman who became crucial to the Irish movement for independence as well as the labor movement and women's rights.

I was initially intrigued by this book after Evangeline Holland of Edwardian Promenade blurbed it positively; I was deeply curious at the idea of Edwardian Ireland and the wild tumultous mix of passion and politics seen during this time.

Neary plunges the reader into the excitement, opening after the famous 1916 Easter Rising, then moving to 1903 when Helena first entered the movement for Irish independence. For those unfamiliar with early 20th century Irish history, Neary provides enough context and details for readers to understand what is happening. With Helena new to the movement at the story's start, the reader and Helena move together through the ranks and various intrigues in the fight for Irish independence, and within pages, I found myself gripped by the story.

The hook of the novel is Helena: she's smart and committed, both starry-eyed and level-headed. While historically a marvelously grand woman, in Neary's hands her accomplishments feel real and authentic, and I never found myself frustrated with a too-perfect heroine.

Neary makes vibrant the various figures from the movement, and the story reads almost like a soap opera -- from Countess Constance Markievicz's tiara-wearing arrival at an organizing event to her founding of an armed scouting movement or Maud Gonne's revolutionary group for women, Inghinidhe na hÉireann, to her involvement with poet W.B. Yeats -- without becoming cartoonish or silly. Every character is delightfully flawed and portrayed with warm humanity; I was horrified and charmed by Countess Markievicz at various times, for example.

My only complaint is a lack of Author's or Historical Note, which is my favorite part of a historical novel; otherwise, this book is a fantastic saga-ish read of a wonderfully dramatic era in history.

Fireship Press is becoming a new favorite for finding unusual historical fiction and this offering sets a high bar for other historical novels and indie presses.

For those who like early 20th century settings but might be Downton Abbey-ed out or want something different than a straight up World War I narrative, consider this book. Hibernophiles and those who love all things Irish absolutely need to start reading.
* book reviews book rating - liked