A Triple Knot by Emma Campion 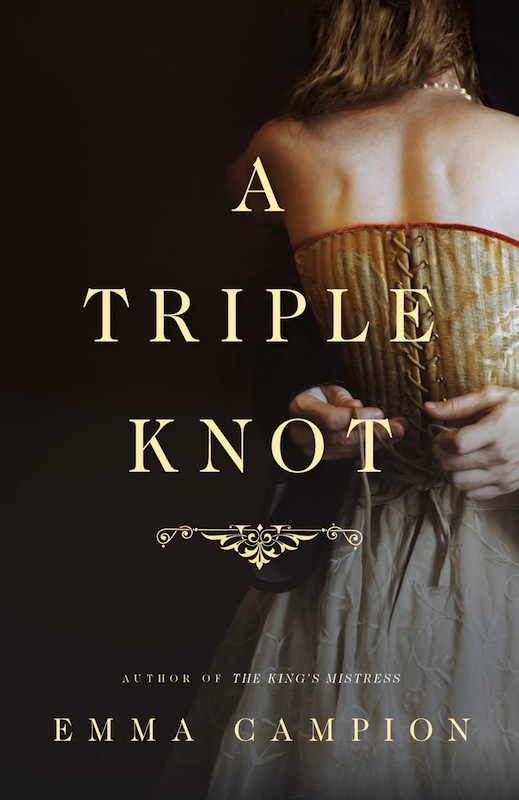 Rating: Eh.
Did I finish?: I did not.
One-sentence summary: A rebellious girl takes what she can when she pursues the love of her choice even as her cousin, the King, declares her betrothed to another.
Reading Challenges: E-book, Historical Fiction, NetGalley & Edelweiss

Do I like the cover?: I do -- super gorgeous -- and probably not accurate, costume-wise.  But eye-catching.

First line: Joan's father, Edmund, Earl of Kent, was beheaded when she was not yet four years old.

Why did I get this book?: I love novels about historical figures one rarely sees in fiction.

Review: While most of the bloggers on this tour enjoyed A Triple Knot, I'm sad to say I did not.  Despite the focus on a little-fictionalized royal -- medieval Joan of Kent, cousin of the King, Edward III and eventual spouse of Edward of Woodstock, aka the Black Prince -- I was a bit bored by this plot-and-action heavy novel.

Set between 1338 and 1361, the novel follows the famous "fair" Joan of Kent -- and sadly, she was the heart of my problem with this novel.  Her biggest claim to fame is her beauty, but Campion also paints her as relentlessly good.  Dominated by her bratty, cruel cousin, Ned (as Edward is styled), who is obsessed with marrying her, Joan instead boldly marries -- at 12! -- a man twice her age.  When her family learns of her marriage, their cold response is to declare her marriage a invalid and marry her to another man.  Ned is relentless in his abusive attentions, and powerful figures in English and foreign courts jockey to minimize her power.

So much salacious excitement, yet reading more than half of the book (290 pages) was an exhausting effort.  Campion's narrative style has a kind of distance to it that made me feel disconnected from the characters.  Additionally, our heroine felt static to me: Joan was a naive, overly kind child who never grew out of her passive desire to please everyone and worse, despite the twenty year story arc, she sounded the same on the first page and the 200th page.

Still there were deft and interesting characters and interactions: Joan's rival, so to speak, an experienced courtier, treats Joan with a measure of kindness as she privately advocates to keep Joan from marrying -- or being seduced -- by an older man. Even though she's envious of Joan's connection with a handsome knight, she still offers to help Joan and the knight be public with their relationship.  (I found her more interesting than Joan, sadly!)

As for extras, my review copy only contained a skimpy cast list -- just the royal English family -- and a brief Author's Note detailing some of Campion's choices for her Joan.

Sarah Johnson of Reading the Past has a fabulous review of this book for those tempted but unsure based on my review.  This one just didn't click with me -- I'll admit to being a bit mushbrained at this point in my pregnancy -- so if you're intrigued by Joan, medieval English aristocracy, or the Black Prince, consider this one.
* book reviews book rating - unfinished