From the Fifteenth District by Mavis Gallant 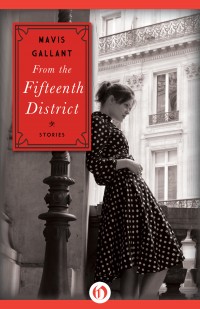 Rating: Liked a good deal.
Did I finish?: Yes.
One-sentence summary: Nine short stories of individuals outside of their own communities -- due to war, love, work, or health -- who find their identities challenged

Do I like the cover?: I do --I'm a sucker for this kind of styling.

First line: In the south of France, in the business room of a hotel quite near ot the house where Katherine Mansfield (whom no one in this hotel had ever heard of) was writing "The Daughters of the Late Colonel," Netta Asher's father announced that there would never be a man-made catastrophe in Europe again., from 'The Moslem Wife'

Why did I get this book?: I'm a big Gallant fan.

Review: This collection is a reissue of Gallant's well received collection of moody, smart, and emotionally restrained short stories. A wonderful introduction for those new to master writer Mavis Gallant, this volume has some of Gallant's best works, including her delicious 'The Moslem Wife', first published in the New Yorker in the '70s. (Michael Ondaatje once said "'The Moslem Wife' has more going on in it than five novels", and it's true!)

Set in Europe ahead of, and after, World War II, her stories focus on ex-pats and the displaced, those who cling to an identity that might not exist anymore, or perhaps never existed at all: an English hotelier in the South of France; an Italian girl in another part of the country, working for an English family at odds in their own English community; a young German POW who returns with an idea of his mother in mind and finds a different woman.

Short stories have been a perfect way for me to get back into reading now that I have a baby and I loved this collection. Gallant has marvelous narrative style: she manages to pack background, judgment, descriptive details, sense of place, and lyrical loveliness into every sentence.


The time was early in the reign of the new Elizabeth, and people were still doing this -- migrating with no other purpose than the hope of a merciful sky., from 'The Remission' (p44)


For a time her letters were like the trail of a child going ever deeper into the woods. He could not decide whether or not to follow; while he was still deciding, and not deciding, the trail stopped and the path became overgrown behind her., from 'Baum, Gabriel, 1935-()' (p82)

While most of the stories touch upon some aspect of World War II, they're not war stories per se, nor do they read like historical fiction. They're lightly literary but very readable, deep without feeling obtuse. Gallant is a writer's writer, too: for those who admire the craft of storytelling, these pieces are delightful to admire and dissect (as I have been doing).

The Age of Miracles by Karen Thompson Walker 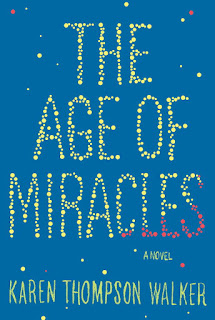 Rating: Liked.
Did I finish?: Raced through it in about two hours.
One-sentence summary: A fourteen-year old girl reflects on the year the Earth's rotation slowed down.

Do I like the cover?: I actually don't -- I don't think it captures the novel's feel nor plot, but I do like the textured cover. I suppose it offers a kind of youthfulness that represents the heroine but doesn't look straight out YA.

Buy, Borrow, or Avoid?: Borrow or buy -- even if you don't consider yourself a YA reader, this is really a coming-of-age novel in a unique setting.

Why did I get this book?: I love disaster novels.

Review: This quick read is a quiet coming-of-age story with an unusual setting. Sometime now, or va…
Read more