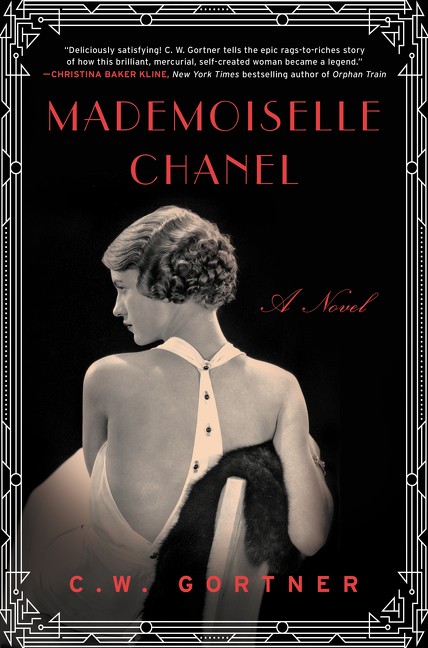 Rating: Looooooooooooooooved -- a fav of 2015.
Did I finish?: Yes.
One-sentence summary: Famed fashion designer Coco Chanel tells her story, from her childhood as a seamstress in a convent to her rise as one the world's trend setters, as well as her fall from grace after World War Two.
Reading Challenges: Historical Fiction

Do I like the cover?: Eh -- I'm not, but this black and white design is a nod to Chanel's iconic style.

First line: The herd gathers below.

Why did I get this book?: Gortner's work is stand out and I wanted to see his take on this legendary, controversial figure.

Review: The luxurious Chanel brand is iconic -- the perfume, the fashion, its founder -- and I'm surprised Gabrielle "Coco" Chanel hasn't been featured in a historical novel before. Her hist fic debut comes from C.W. Gortner, whose sublime The Queen’s Vow humanized Isabella, and this novel has set the high water mark for any future reads that attempt to tackle the notorious Chanel.

Born at the end of the 19th century in abject poverty, Gabrielle Chanel was turned over to a convent where she mastered sewing. Rather than taking vows to become a nun, Gabrielle instead became a seamstress and more daringly, a club singer -- where she earned her nickname Coco. Quickly, through her skill, ambition, and some fortuitous relationships, Chanel managed to project herself to fame over the decades as her once radical designs -- corset-less, trim, daring, modern -- set the standard for chic fashion. Weathering World War I and II, as well as devastating heartbreaks and notorious love affairs, Chanel lived a life that knew deprivation and luxury in equal part.

While the subject of this book is fascinating -- not just Coco herself, but the world she lived in -- the novel is made by Gortner's writing. Occasionally, I eye-roll when biographical novels use the first person viewpoint, as I find it makes the narrative all tell and no show, and allows the author off the hook when it comes to thornier details.

In Gortner's hands, however, Coco articulates her life with the spare, artistic verve of her designs. (He took his hand away. Not with harshness. His fingers just unraveled from mine, like poorly spun threads., p11) Even more delightfully, Coco's voice grows as she does, rather than remaining static throughout the book.

And the clincher: Gortner dealt with the ugly stuff. I was most curious about how Gortner would handle the allegations that Coco was a Nazi collaborator and spy. It's obvious from this sympathetic novel that Gortner admires Chanel, and his suggestion of how the fashion designer became embroiled with the Nazis is sympathetic. But he offers characters who question her motives, her contradictions, allowing the reader to voice their doubts, too -- and like Coco's friends, we have to decide if we believe her. I found Gortner's articulation of Coco so solid that while I clucked at her choices, I understood why she made them.

This makes my second top ten read of 2015. Even if you're not a fan of fashion, consider grabbing this book, as it really is the story of a self-made woman, a visionary who imagined the way women wanted to live that differed from what society said. There are tawdry details brushing shoulders with heavier themes, armchair escape to early 20th century France, and some delicious name dropping that sent me into Wiki rabbit holes. At this point, I want Gortner to tackle every fashion designer -- like Chanel's nemesis, Elsa Schiaparelli -- but regardless of who he tackles next, I'm there.
* book reviews book rating - loved