The Abduction of Smith and Smith by Rashad Harrison 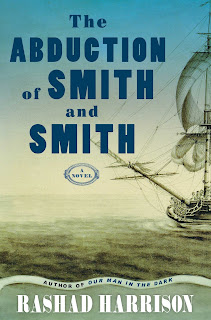 Title: The Abduction of Smith and Smith
Author: Rashad Harrison

Rating: Mostly liked.
Did I finish?: I did!
One-sentence summary: After the American Civil War, a former slave searches for his missing wife while his half-brother, the son of his owner, seeks him out to exact revenge, and both are caught up in a violent conspiracy abroad.
Reading Challenges: Historical Fiction

Why did I get this book?: Harrison's first novel, Our Man in the Dark, was awesome.

Review: I'm a huuuuuuuge fangirl for Harrison's first novel, Our Man in the Dark and I've been on pins-and-needles for his next release. I inhaled this read -- it's a dramatic, plotty, swashbuckling-ish yarn -- but am a little conflicted about how I feel!

Set just after the Civil War has ended, the novel follows Jupiter Archer, a former slave who fought for the Union Army, now living as a "crimper" in San Francisco. A crimper, as it turns out, is someone who essentially kidnaps -- or Shanghais -- men to work on ships. It's not the job he wanted, but he's frantically searching for his wife. He's also being pursued by Archer Smith, the son of his former owner; Archer also happens to be his half-brother. Theirs is a complicated relationship (no surprise, right?) made even more complicated when they both are crimped themselves and tossed onto a ship with the cagey, charismatic Captain Barrett. From there, the novel goes on a dramatic, action-filled journey halfway around the world while Jupiter and Archer struggle to get what they each desire.

As with his previous novel, the characters are evocative and compelling. Jupiter is a deeply sympathetic figure, but everyone in this book is complicated and shaded in gray. Archer seems, on the surface, to be one-note -- simply after revenge -- but as the novel goes on, we see the damage he suffered at the hand of his parents. Even the bombastic Captain Barrett, who has shades of Ahab and the Terminator to him, is a fascinating figure.

Harrison perfectly balances the adventurous plot with lovely ruminations; my copy is dogeared from all the delightful quotes I wanted to remember and note.


"I'm going to fight for my freedom," said Jupiter. So earnest, he was. Did he believe it? What did he know about fighting? Honor. Valor. Those were things he overheard the sons of plantation owners talk about as they played soldier with their wooden swords. What did he know of it? He was simply a mockingbird with his wings clipped, singing a song in which he mimicked the sounds but couldn't grasp their context. (p40)

My only complaint about the book is that it had an episodic feel, almost like a screenplay that had been filled out. A character might think of something -- a memory, for example -- and then Harrison would immediately whoosh to that scene in a slightly awkward way. Occasionally, events happened so quickly I felt like I was being rushed out the door, and I wouldn't have minded a longer novel to spend more time with Harrison's intriguing cast.

I'm once more excited for Harrison's next offering (if there is one, I don't know!). A quick read that has the sort of feel of a "rip-roaring yarn" with a contemporary understanding of slavery, servitude, and family, this novel is worth picking up this summer for those who enjoy historical fiction, nautical tales, and stories that touch on what happens after war and other bloody conflicts.
* book reviews book rating - loved