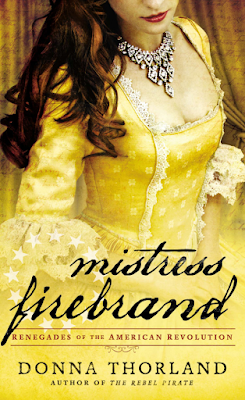 Do I like the cover?: Oh, I just love it even though it has the headless woman motif.

Why did I get this book?: I'd heard great things about Thorland's previous novels.

Review: I've long wanted to read Donna Thorland as I love Revolutionary-era historical fiction and have seen rave reviews for her books. Happily, I wasn't disappointed with this read, which was atmospheric, detailed, and vividly done.

Set in 1777, Mistress Firebrand features a young American playwright, Jennifer Leighton. Niece to the much toasted actress Fanny Leighton, Jennifer aspires to fame, and considers a daring plan to do so: have British general John Burgoyne act as her patron. Burgoyne is a notorious womanizer, so British spy Severin Devere decides to ward off any distractions, but finds himself charmed and intrigued by the writer. Pretty soon, both become caught up in the war between England and the colonies, and both have to decide where their loyalties lie, a decision made more complicated by their very obvious interest in each other.

In addition to being a fabulously fun historical romance, Thorland tackles some rather "modern" issues in the story, which just ratchets the book from good to great: careers over relationships, safe sex through condom use, and the idea of pleasure and happiness. Jennifer and Severin (and their friends and enemies) felt historical grounded and yet, discussed and debated topics that are relevant to people today (which I love). There was a real struggle, not just for Jennifer and Severin to survive a war unscathed (which was exciting enough), but for the two of them to have professional happiness, too.

I mean, read this, from our heroine Jennifer. I practically cheered on the subway:

There were sexytimes that were hot and plotty (and surprising!). There's a fabulous wealth of detail about 18th century theater (Jennifer is inspired by Mercy Otis Warren and her aunt by Mary Darby Robinson, two real life figures I love, so I've got love-upon-love here!) as well as exciting wartime drama. This isn't a fluffy read, not precisely, but it races from the mix of romance, tension, and humor -- a combo I love.

Technically, this is the third book in Thorland's Renegades of the American Revolution series, although I don't think they're actually connected in any way other than setting. I'm dying to get my hands on the other two now -- I'm a Thorland fangirl!