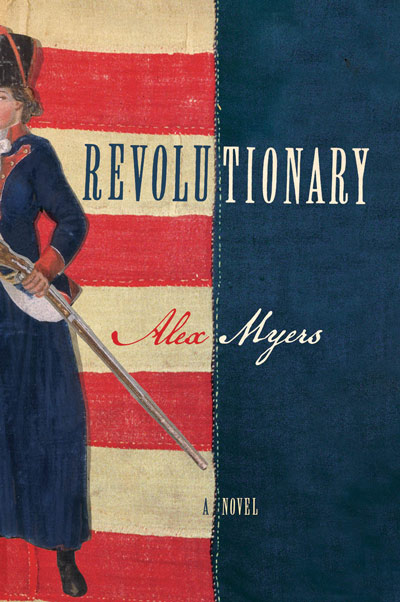 First line: A man in a blue coat crossed the common, and Deborah craned her neck to glance through the window.

Review: I'm woefully behind on this review -- I inhaled this one back in January, the first full length novel I read after giving birth to Unabridged Baby in November. It was a wonderful return to reading.

I'd been dying to get my hands on this one since it's original release; between the setting -- Revolutionary War -- and the premise -- a woman who passes as a man -- I was immediately intrigued. My eagerness was well placed as this is a wonderfully engrossing read that is impossible to shake.

Set in 1782, the novel follows Deborah Samson, an indentured servant who is a weaver in a small Massachusetts town. Frustrated by her present circumstances and impatient with the few opportunities ahead of her, Deborah signs onto the Continental Army as Robert Shurtliff. She finds soldiering immediately fits her personality and years of hard work allows her to blend in with the other recruits. In time, her identity as Robert the soldier blends, bleeds, and trumps that of Deborah, but as she tries to imagine what her future is like, she's forced to decide who she is and how she wants to live.

Booth took the stack of coats the soldier passed him. "Think of the lasses in Massachusetts weaving and sewing these garments for you," he said. The words caught Deborah short; she had been such a lass, weaving cloth at Sproat's, listening to the other girls talk of their brothers and husbands gone to be soldiers. She had woven and envied and wished, and now here she was, on the other side -- on the inside -- of that same fabric. (p72)


Samson is a real historical figure, and her time in the Continental Army is fact. Myers convincingly depicts the life of Deborah/Robert -- the historical details are fabulous, rich without being overwhelming -- and makes believable this fascinating story. (And the end, oh the end! I cried. In a good way.)

My favorite part of this book was Myers' narrative style and the way he articulated the conflicting push-pull of Deborah/Robert. Deborah is Robert and Robert is Deborah, and yet, each struggled to live fully within the social constructs facing them: Robert could live the unencumbered free life that Deborah always yearned for, but love and motherhood seemed something only Deborah could have. In the story, Myers would shift between identifying Sampson as Deborah or Robert, but this isn't a story of two people, or split personalities. It is a bittersweet -- and occasionally just bitter -- look at the complicated dance done when society tries to push people into tight frames, relevant now and compellingly done.

A wonder historical novel of Revolutionary era New England, and a fascinating biographical novel of a forgotten, but intriguing, figure.