Enchantress of Paris by Marci Jefferson 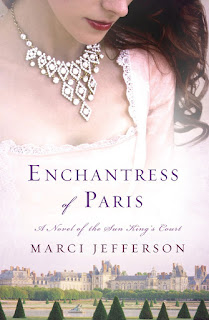 First line: Footmen threw open the front doors of my casa, my sanctum of peaceful exile in Madrid for nearly a decade, and a whiff of spices and the gleam of moonlight filled my front hall.

Review: I'd been dying to get my hands on this book solely because I adored Jefferson's debut novel, Girl on the Golden Coin. And while I loved that book, I think I might love this one more. It has another charming, convincing heroine whose voice sealed my adoration from the first page, evocative historical details, and a dramatic plot that made me race to the last page.

Set during the reign of the young Louis XIV, the titular enchantress is Marie Mancini, an Italian noblewoman and niece of the powerful Cardinal Mazarin. She and her beautiful sisters are better known as the Mazarinettes for their obedience to their ambitious uncle, who is the close personal adviser to King Louis.

Mazarin has no qualms about throwing his nieces into the king's arms to keep the monarch's attention, and Marie's older sister Olympia is Louis' current mistress. But Marie and Louis have an immediate, intense connection, and Mazarin doesn't hesitate to encourage Marie's relationship with Louis when Olympia becomes pregnant. But Mazarin doesn't count on the true passion between Marie and Louis, nor Marie's intense desire to free the young monarch from her uncle's clutches.

As with Jefferson's debut, it's the heroine that so seduces me, and in this case, Marie -- clever, smitten, and conflicted -- won me immediately. She's from an intensely ambitious family and has no delusions about the expectations of herself and her sisters, yet in Jefferson's hands, Marie manages to hold onto youthful wistfulness, optimism, and naivete.  I was so caught up in Marie's dream that found myself hoping Jefferson managed to change history to give Marie her happy ending.

There's a complicated swirl of plot surrounding Marie and Louis -- war with Spain, the Mancini's family connection to witchcraft and astrology, marriage contracts and other noble concerns -- and Jefferson manages to make these elements effortlessly connect without bogging down the story and narrative flow. And even with the strong romantic thread in the novel, Marie's story is really that of freedom -- from her uncle's tyranny, from imprisonment in a convent or a forced marriage -- and coming-of-age when one's value was assigned, not seen.

This is a Top Ten of 2015 read for me, and cinches my status as a Marci Jefferson fangirl. Francophiles and fans of royal hist fic, get this immediately! For anyone wanting a splashy summer read, enjoy this one on the beach (perhaps with a few macarons!).

I'm thrilled to offer a copy of Enchantress of Paris to one lucky reader! To enter, fill out this brief form. Open to US readers only, ends 8/14. See my Giveaway Policy for complete rules.
* book reviews * giveaways book rating - loved