- December 14, 2015
I just loved A Year of Ravens, a fabulous collaborative novel about the story of Boudicca and her rebellion against the Romans. It was gutting and gruesome, and had me in tears often. I've a soft spot for Boudicca as well as the stories of women forgotten by history, and A Year of Ravens handles both beautifully.

I'm so delighted to share my interview with the seven authors of A Year of Ravens -- Ruth Downie, Stephanie Dray, E. Knight, Kate Quinn, Vicky Alvear Shecter, S.J.A. Turney, and Russell Whitfield -- who reveal some fun tidbits about the process of creating this novel, working together, and what surprised them.

Where did the book's title come from? (And who came up with it?)

STEPHANIE: Kate, Eliza and I were at Panera Bread trying to think of a title that would go with our previous release, ‘A Day of Fire’ and I stumbled onto ‘A Year of Ravens.’ I loved it so much that I then wouldn’t let them change it to anything else.

ELIZA: Stephanie’s genius took this one!

KATE: I suck at titles, so I let Stephanie do the heavy lifting there . . .

SIMON: I came to the project with the title already in place. I wouldn’t change it for the world. It’s fantastic. Stephanie at her best.

RUSSELL: Like Simon, I came in when it was already titled.

How did each author land on their character/POV? Was it challenging to knit so many different points of view into a single narrative?

RUTH: I knew I was writing the aftermath of the Roman outrage and we’d seen the royal viewpoint in Stephanie’s story, so I chose a slave as a complete contrast. It was great to have her react with characters who were actually created by other people, instead of projections from inside my own head!

STEPHANIE: I was supposed to write from the POV of the Roman procurator’s wife, Valeria. Meanwhile, Vicky Alvear Shecter was supposed to be writing about Cartimandua, but the Queen of the Brigantes was talking to me instead. So we all swapped!

ELIZA: I really really really wanted to tell the story of the daughters, because their history has quite literally never been written other than a few lines here and there which give us virtually nothing about them, other than they were raped. No names. No stories. I wanted to give them a voice, and I really hope I did them justice. I don’t think it was challenging to knit our POVs--it was fun to see my girls come alive in the other stories!

KATE: I picked a warrior so I had eyes in that final shield wall, and gave him the high-born Valeria as a slave so he had someone to argue with - they were Rome vs. Britanniaon a one-on-one level. I loved their arguments.

VICKY: When I realized we didn’t have a Druid in the story, I became obsessed by the idea.

SIMON: I was assigned the point of view of the Iceni in my brief for the story to help balance the various viewpoints. I might have screwed that up a little by giving him a somewhat Roman past, but it all worked out in the end.

RUSSELL: I think they thought “Russ is known for violence and swearing… and so are his books. Let’s give him the Army bit.” No, Agricola’s tale was on the slate when I was invited and I asked if I could do that one. 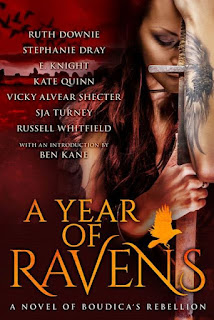 How was research for this novel handled? Were all participating authors armchair experts in this era?

RUTH: I have a longstanding obsession with Roman Britain - maybe because I went to school in Colchester, the first town Boudica’s army burned down. I just think I’m lucky to have found a job where this is seen as vaguely normal. Or at least, useful.

STEPHANIE: Because of my previous work, I’m particularly versed in Roman client kingship. But the ancient Britons were a total cipher to me so I was so grateful to pull in writers from the UK! We all helped each other, and Ruth was our wonderfully picky fact checker.

ELIZA: I know quite a bit about “Celtic” culture, but I stuck to the others’ expertise as far as Roman. There were several books I used for research: Boudica by Vanessa Collingridge; Boudicca’s Rebellion by Nic Fields and Peter Dennis; The World of the Celts by Simon James.

KATE: I pretty much lived inside my “Daily Life Among the Celts” tomes.

VICKY: I used this opportunity to purchase a number of scholarly books on the Druids because there is so much fantasy around the religion. There are actually only a handful of beliefs that have some kind of ancient mention, so I concentrated on those.

SIMON: I’ve been writing about the Romans and the Celts for the past decade, and my education is in classical history. Though my previous subject is the Republic vs. Gaul, the slip from there to Empire vs. Britons is remarkably easy.

RUSSELL: I just make it all up and blame wikipedia and Ruth Downie when it’s wrong. I didn’t think the time-travelling Ninja attack from the helicopter was a bridge too far, but I was voted down on that one. That and some very handy online resources - I knew a little about the Roman Army to start with, so it was really the events that I had to get right.

Was anyone surprised by something that happened in their own writing -- a scene, a character, or a sentence?

RUTH: I knew that writing from the point of view of a character who’d survived sexual violence was going to be challenging but I hadn’t expected it to have quite the emotional impact it had on me.

STEPHANIE: I was taken by surprise when my Roman procurator, Decianus, turned out to have had a mother who committed suicide for honor. I blame Russ, whose story got me thinking in that direction.

ELIZA: I was surprised at how strong Keena became, because she started out so frail. It was exciting to watch both of my characters grow and reach their ultimate goals.

KATE: I knew I wanted my Celtic warrior and my Roman woman to develop a grudging respect for each other despite culture clash and the slavery issue, but I didn’t know if I could pull it off.

VICKY: I wanted to understand how individuals rationalize terrible violence and I was surprised by the moments of humanity that kept poking through and how each boy shoved it away, calling it a sign of weakness.

SIMON: I was surprised at how my principal character grew far beyond the bounds of my original plan. He was a three dimensional character anyway, but when the other authors added their thoughts and ideas to the mix, he became four dimensional at least. I love the finished Andecarus.

RUSSELL: I don’t know - I was surprised at how real one of the minor characters - Paulinus - became to me. I felt possessed when I was writing him, I could really see it all in my mind’s eye. Even when I sobered up.

My thanks to the authors for their time and thoughtful answers, and to Amy at Historical Fiction Virtual Book Tours for facilitating!

Check out other reviews and interviews via the blog tour page, which includes purchasing info as well.
* interviews