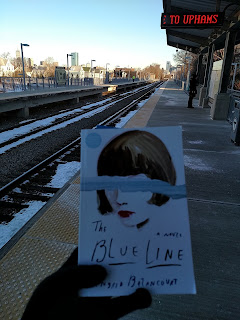 It has been a whirlwind week, and I kind of don't believe it's real!

Last Friday, we closed on a condo in a fabulous neighborhood in Boston. We spent Saturday packing, and we moved in on Sunday! We're still in the midst of unpacking, but we're reveling in our new space -- we've gone from a tiny one bedroom to a three bedroom! The baby gets his own room now! Once the place is cleaner, I'll share some photos!

I'm reading The Blue Line by Ingrid Betancourt, and it's like Isabel Allende meets Susanna Kearsley. I just love it so far. It's Betancourt's debut novel, although she's written two other non-fiction books. For those who might not be familiar with her, Betancourt is a Colombian politician who was kidnapped and held hostage for almost seven years. I was captivated by her story and am delighted to see she's dipped her toe into fiction.

What are you reading this weekend?