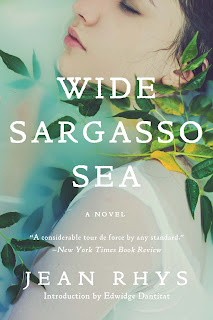 First line: They say when trouble comes close ranks, and so the white people did.

Review: My first read for 2016, and ohemgee, what a stunner.

This brief but sumptuous novel -- originally published in 1966, but reissued this year by Norton with a lovely introduction from Edwidge Danticat -- imagines the life of Bertha Mason, the "madwoman" from Charlotte Bronte's Jane Eyre.

Shifting viewpoints between Antoinette, as she prefers to be called, and a young Englishman we assume to be Rochester, we see a vivacious young woman pinned down by society, powerless and frustrated, pushed to her emotional limits. Is she mad? Rhys suggests she isn't, but her husband -- perhaps a little mad himself -- feels otherwise, and he has the power to punish her and declare her such.

I have to confess that Jane Eyre is not one of my favorites books, so I was predisposed to like Antoinette and hate Rochester. Yet Rhys managed to make Rochester sympathetic, in a way: he's a young man who has to marry for money, and worse, a "Creole" rather than a proper Englishwoman. For a moment, he's even taken with Antoinette but his conservative mores and twisted attitudes about sex and desire transmute his interest into disgust.

Worse, the Caribbean landscape -- hot, wet, and wild -- seems to give Antoinette strength, which repels him:


I hated the mountains and the hills, the rivers and the rain. I hated the sunsets of whatever colour, I hated its beauty and its magic and the secret I would never know. I hated its indifference and the cruelty which was part of its loveliness. Above all I hated her. For she belonged to the magic and the loveliness. She had left me thirsty and all my life would be thirst and longing for what I had lost before I found it. (p156)

This is a quick read -- about 170ish pages -- but it invites deep lingering and re-reading (I ended up reading it for a second time a few nights after finishing!). Rhys' writing, as seen above, is lush and evocative, and she can, in a handful of words, paint a scene vividly.

I was strongly reminded of stories like "The Yellow Wallpaper" -- could women's madness be the way men and society cage them and tell them they're mad? -- and while I felt fury toward Rochester, I didn't loathe him as I anticipated. I felt terrible for them both, these passionate people who couldn't connect and were oppressed, in different ways, by society. I was also struck by a similarity to Rebecca, especially with women in both books dreaming of returning to their beloved burned estates.

This edition has a lovely introduction by Edwidge Danticat which reads like an argument for why #WeNeedDiverseBooks. It's a love letter to a story about oppression, colonialism, and solidarity, and might be one of my most favorite introductions to a classic novel ever.

By accident, 2016 might shape up to be my year of (inspired by) Jane Eyre, in a fashion. In my queue for this year was this book; Catherine Lowell's novel about a Bronte descendant, The Madwoman Upstairs; Lyndsay Faye's Jane Steele, a murderous retelling, of sorts; last year's Re Jane;  the short story collection Reader, I Married Him; and a poetry collection, The Jane and Bertha in Me. I ought to just put Jane Eyre in as a reread and see if my feelings for it change!

A must read -- not just for fans of Jane Eyre -- but for anyone who enjoys feminist literature, or novels fraught with unspoken sentiments and explosive desires.