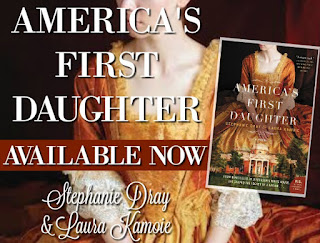 One of my most anticipated reads of 2016, America's First Daughter by Stephanie Dray and Laura Kamoie, is out today!

Tackling the supremely complicated Jefferson through the viewpoint of his devoted daughter Patsy, this novel represents what I adore about historical fiction: the humanizing of distant figures. I've been sharing some tidbits about Patsy Jefferson from America's First Daughter, and now I'm especially delighted to be able to share a rather juicy excerpt below! Be sure to enter the giveaway to win a signed copy, too!


In a compelling, richly researched novel that draws from thousands of letters and original sources, bestselling authors Stephanie Dray and Laura Kamoie tell the fascinating, untold story of Thomas Jefferson’s eldest daughter, Martha “Patsy” Jefferson Randolph—a woman who kept the secrets of our most enigmatic founding father and shaped an American legacy. 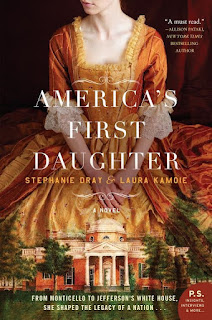 From her earliest days, Patsy Jefferson knows that though her father loves his family dearly, his devotion to his country runs deeper still. As Thomas Jefferson’s oldest daughter, she becomes his helpmate, protector, and constant companion in the wake of her mother’s death, traveling with him when he becomes American minister to France.

It is in Paris, at the glittering court and among the first tumultuous days of revolution, that fifteen-year-old Patsy learns about her father’s troubling liaison with Sally Hemings, a slave girl her own age. Meanwhile, Patsy has fallen in love—with her father’s protégé William Short, a staunch abolitionist and ambitious diplomat. Torn between love, principles, and the bonds of family, Patsy questions whether she can choose a life as William’s wife and still be a devoted daughter.

Her choice will follow her in the years to come, to Virginia farmland, Monticello, and even the White House. And as scandal, tragedy, and poverty threaten her family, Patsy must decide how much she will sacrifice to protect her father's reputation, in the process defining not just his political legacy, but that of the nation he founded.


AN EXCERPT FROM AMERICA'S FIRST DAUGHTER:

Mr. Short smiled. “If you could give up all thoughts of the convent, our future depends upon the orders your father is awaiting from America. Your father has asked that in his absence, I be appointed in his place as chargé d’affaireswith commensurate salary. If I receive such an appointment, then I can present myself to your father as a worthy suitor. Otherwise, I’m afraid he’ll consider me a wandering wastrel without employment.”

Mr. Short chuckled mirthlessly. “You think not? I have in my possession a letter from your father lecturing me on the need to build my fortune. The most memorable line reads: This is not aworld in which heaven rains down riches into any open hand.”

How churlish of Papa, but had I not, from the youngest age, also received letters filled with his lectures? “You mustn’t worry, Mr. Short. If my father requested your appointment, then it’s sure to come. But until it does, how can I be sure of your intentions in asking for my love?”

I didn’t expect him to laugh. “You’re Jefferson’s daughter, to the bone. You want evidence. Well, give me the chance and I’ll give you the proofs you require—both of my love and of the world you should love too much to abandon even for God. I wouldn’t have you enter a convent, much less love, in ignorance.”

“What do you think me ignorant of?”

With mischief twinkling in his eyes, he stopped, drawing me into a grove of trees. Beyond us, in the ditch, we heard boys playing a ball game in the dim lamplight. Somehow, in the dark, Mr. Short’s fingertips found my cheeks, and his mouth stole over mine. This first kiss was soft and tender. As if he feared frightening me. Nevertheless, it shocked me. It was like my heart was a loaded cannon he’d held fire to, and it threatened to shoot out of my chest. But I wasn’t frightened and I didn’t pull away. Instead, it seemed quite the most natural thing to kiss him back, mimicking what he did, glorying in every soft, sweet sensation.

At the feel of my lips teasing softly at his, he groaned and pulled back. “Oh, my heart . . .”

The sweet taste of him still on my lips, our breaths puffing in the night air, I asked, “Have I done something wrong?”

He held my cheeks in his hands. “The error was all mine. I’d beg your pardon if I could bring myself to regret it, but I never want to regret anything with you, so tonight I must content myself with one kiss.”

Only one? I wanted to lavish a thousand kisses on his face. His lips, his cheeks, his ears. The desire was a sudden hunger, a desperate plea inside me echoing like the cry of peasants for bread.

“What if I’m not yet content? Wasn’t kissing me meant to be the proof of your intentions?”

“No, Patsy. Kissing you, then stopping before satisfaction, is the proof of my intentions, which I hope you’ll see are honorable and directed toward your happiness.”