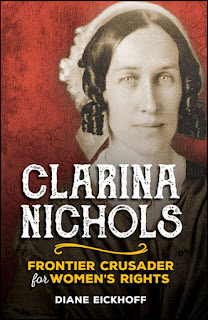 First line: On the morning of July 18, 1868, a train carrying the most famous man in American pulled into the frontier town of Manhattan, Kansas.

Review: Earlier in March, I finished Eva Flynn's fabulous historical novel, The Renegade Queen, about Victoria Woodhull, a woman I knew only as the first woman to run for president. (She was so much more! Someday I'll get to that review!)

Following that read was this Young Adult biography about Clarina Nichols, a figure totally unfamiliar to me --a smart, forward-thinking woman in the early 19th century who fought for abolition, suffrage, and freedom for all families. Somehow, Susan B. Anthony has become the figure most familiar to all of us for her transformative work, but women like Nichols were just as important in progressing the causes of freedom and justice.

Needless to say, Nichols, and this book, would have been exactly the kind of thing I would have gulped up in middle school.

Born in Vermont, Nichols was from a frugal but successful family that valued their smart, empathetic daughter. Clarina was given a "traditional" women's education, but her parents also encouraged her reading and writing, and obviously admired her moral compass and strength in framing arguments. As a child, she accompanied her father during his tenure as a "poormaster", a kind of judge/aid giver, and she heard first hand the horrific trials that the poor and disenfranchised experienced. With these seeds planted, Nichols aspired to use her gifts not only to raise a family but to also enact change.

Through a troublesome marriage, and a happy one, Nichols pursued her passions and used her gifts to sway the hearts and minds of her fellow neighbors and Americans, advocating for the right's of women and the abolition of slavery. Most daring, Nichols moved herself -- without her husband! -- to Kansas as part of the abolition movement to ensure Kansas vote against becoming a slave state.  When she realized the great changes she and her family could enact, she moved everyone there, and became a beacon there for liberty and freedom. (This is the setting of the historical novel I'm struggling with, so this book was an unexpectedly useful read for me!)

This book is actually a YA version of Eickhoff's biography on Nichols. I don't know if Eickhoff has experience writing YA but the tone of this read felt more middle grade to me than high school -- I would have loved this in the 5th or 6th grade. (By sophomore year of high school, I'd probably have attempted Eickhoff's bio.) Regardless, I greatly enjoyed and appreciated what Eickhoff offered in this read: she didn't shy away from some of the more depressing parts of 19th century life for women, and she offered great context for many of the events in the book. (Her explanation of mass movements on page 27, and in particular, the movement for women's suffrage, takes two paragraphs and is really stellar for articulating how and why some social movements bubble up, seemingly from nowhere.)

This book is loaded with photos and illustrations, and includes a brief history of the women's movement, detailed footnotes, and a comprehensive index. I read an e-book version which was wonderfully formatted with hyperlinking of footnotes that made "flipping" back and forth easy.

I was excited to learn that the publisher of this book, Quindaro Press, focuses on social justice and history for young adults, and I'm keeping an eye on their offerings as I know many young readers who will love their stuff (I certainly would have!).

A highly recommend read for anyone who has a YA reader in their life who is interested in justice, American history, and fascinating figures.