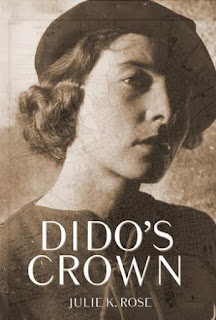 First line: Everything in the ancient port town in Bizerte dazzled: the white stuccoed buildings, the shimmering golden sand, the bleached sails of the dhows, the shocking turquoise of the Mediterranean.

Review: I read Rose's previous novel, Oleanna, about four years ago, and I still think about it. So it probably goes without saying that I've been on pins and needles for her next release.

This book couldn't be any more different than Oleanna, but it's just as enjoyable.  The elements in Oleanna that I loved are present in Dido's Crown: a strong sense of place, wonderfully deep relationships between the characters, and a heroine who is both classically "strong" and also delightfully human. (She realizes she's drooled in her sleep at one point!)

Set in 1930s Tunisia, the novel follows a handful of British academics who, through their service in World War I, have become embroiled in a complicated espionage case from over a decade ago. Will and Tom are reunited with their mentor's daughter, Mary, who accidentally become involved thanks to her duplicitous husband.

Mary, who has been trying to ignore her disastrous marriage by attending Grand Prix races and partying, is forced to face her own secrets but those of her family, too, all while trying to stay alive and one step ahead of those who want the small package she possesses.


How silly and small her life had been: petty jealousies and fast cars and tutoring scholars who didn't respect her, and lately (and frustratingly) who looked right through her. All the while, the truth of her life hovered beyond her vision, tangled and hidden. (p119)

The story opens rather explosively and moves at a brisk clip; between the locale, the plot's who-has-double-crossed-who? mysteries, and rather fierce women, I was reminded of Casablanca, The Maltese Falcon, and Raymond Chandler (but with modern sensibilities). Muslim and gay characters are fully realized in a way they weren't in '30s and '40s films and literature, and our femme fatales don't fall apart with one smoldering look from an alpha male.

This novel introduced me to the fascinating and creepy numbers station, AM radio broadcasts used by spies to send each other encrypted messages, and Rose uses their mysterious existence rather cleverly in this story.

There's an extensive glossary and a delightful, 12-page Author's Note with details and trivia about the history featured in this novel.

Armchair escape at its best, Dido's Crown is an exciting adventure story with surprisingly rich and deep emotional threads and glorious descriptions of exotic Tunisia. It's the kind of read that demands a weekend, because you won't want to stop. My only wish was that it was longer; I would have loved more of Mary and her circle, but what time we do have with them is wonderful.

I'm thrilled to offer one paperback copy of Dido's Crown to one lucky reader! To enter, fill out this brief form. Open to US and international readers; ends 10/21. See additional rules on my Giveaway page.