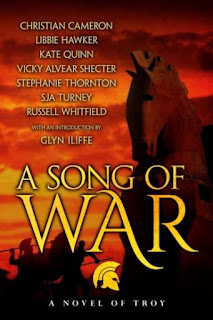 First line: Shall I sing to you of Troy?

Review: It is no secret that I'm a huge fan of the writing collective known as the H Team -- a group of authors who have produced three collaborative historical novels, the first being A Day of Fire and the second being A Year of Ravens. This offering is their third, and it's their meatiest, bloodiest, and most emotional yet.

The fall of Troy takes place over a decade, and the authors of this collection manage to cover the scope of the conflict without losing tension and drama. They took a story that I always perceived as being rather male-heavy, combat-heavy, and honor-heavy, and presented it as a deeply emotional, psychological, and human tale, one told through the viewpoints of five men and four women, and I was really moved and surprised as I read.

In their telling, the collective decided to forgo the mythic, god-meddling basis for the conflict, and so everything that unfolds is due to human foible and folly: greed, envy, pride, selfishness, a mistaken sense of honor. Helen ends up their villain -- tough, calculating, determined to be free -- and even when she's unrepentant, I couldn't help but like her. (She is one of the many figures who isn't presented with her own POV piece, which I actually enjoyed. We none of us get to find out just what exactly she thinks and feels. Is she a monster? A tragic figure? Both!)

The inimitable Kate Quinn opens the collection beautifully, not only setting the stage for this horrific conflict, but introducing many of the key players through the eyes of her narrators, Trojans Andromache and Hellenus. To my delight, Quinn and co-author Stephanie Thornton, who pens Cassandra's chapter, decided to cast twins Cassandra and Hellenus as biracial, a small tweak I found very meaningful and greatly appreciated.

Cassandra has always been a favorite of mine, and I loved Thornton's take on the frustrated prophetess, a woman driven to madness when everyone ignores her.

Russell Whitfield's offering, from Agamemnon's point of view, lingers with me still as a particularly poignant and imaginative piece. Ostensibly a villain, Whitfield rather successful evoked in me some empathy and pity for the beleaguered king, and offered a humanizing look at why these warriors still pursued this seemingly futile war.

Christian Cameron and Libbie Hawker both presented female warriors in their pieces -- Cameron with Briseis, Achilles' war prize taken by Agamemnon; and Hawker with Penthislea, the Amazon warrior who captures Achilles' heart. I confess I'm one to gloss over fight scenes, but Cameron's chariot scene is so cinematic, it's breathtaking. In both cases, I was grateful to see women as soldiers in ways that felt authentic rather than intrusive or anachronistic.

Hawker also imagines Philoctetes, owner of Hercules' bow and Paris' killer, as a gay man, and in her author's note she writes about how important it was for her to present a gay character as a hero. This small change, like that of Hellenus and Cassandra, hardly alters the original story yet makes the reading of it so much more rich and interesting.

Odysseus -- who I suspect will be a fan favorite -- is charming throughout the entire book, and Vicky Alvear Shecter's chapter from his point of view is bitterly funny and achingly sad, and it sets up the tragic conclusion, written by SJA Turney, beautifully. Turney, and by extension his Aeneas, have the unenviable task of wrapping up all these disparate threads, and noble Aeneas proves perfect for the task.

Another knockout read, one that is more battle-oriented than I am normally drawn to, but stuffed full of delicious emotional drama and angst. I didn't want to linger with the conflict anymore, and yet I still felt intense loss leaving everyone, a credit to the authors for creating such wonderful, evocative figures. 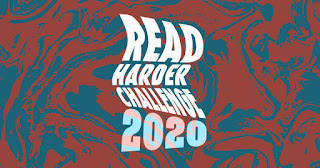 For 2019, I did two reading challenges: Historical Fiction and Read Harder.

I had initially rolled my eyes at about a fourth of the requirements, but in the end, every book I was "forced" to read was ultimately really wonderful. I ended up learning something, enjoying more than I anticipated, and was introduced to new authors and ideas. Many of my favorite reads for 2019 were due to Read Harder -- now I feel like I 'get' reading challenges and I'm hooked!

So I'm pretty excited for Read Harder 2020. If you can recommend anything that fits one of these 24 options, let me know! I'm still developing my list.

1) Read a YA nonfiction book
An Indigenous Peoples' History of the United States for Young People 2) Read a retelling of a classic of the canon, fairytale, or myth by an author of color
Beloved by Toni MorrisonOne Thousand and One Nights by Hanan al-ShaykhTender by Sofia Samatar 3) Read a mystery wh…
Read more