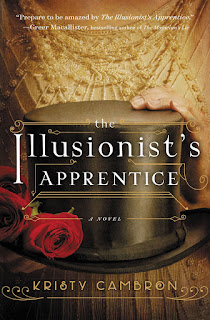 Kristy Cambron is a new-to-me author, but from the reviews I've seen, she's got a devoted fan base. This wasn't a read for me, but I can appreciate why so many love her books.

Set in the high-flying 1920s in Boston, this novel follows illusionist Wren Lockhart (born Jennifer Charles). At the book's open, a spiritualist debunked by Harry Houdini seems to bring a man back from the dead -- who then promptly dies again -- and the FBI think it's murder.

As Houdini's former assistant, Wren comes to the attention of the two agents -- especially when a piece of paper with her real name is found on the dead man.

From there, the novel moves through multiple mysteries, like solving the murder, as well as Wren's mysterious background, including the sister she staunchly tries to protect.

Cambron does a great job evoking the details of the era, from Wren's distinctive style of dress (men's tuxedos) to the trappings of Jazz Age Boston such as the sumptuous brownstones and dingy failing theaters.

I enjoyed the detailed look at the illusionists and their trade, although as this is a Thomas Nelson offering, there's a whiff of religiosity to that thread, which manifested as a strong delineation between illusion and magic/spiritualism (with the latter being 'dark' and wrong, etc.). It wasn't so overt as to ruin my enjoyment of the story, however, and I actually found myself wishing Wren would have spoken more about how her faith impacted her decision to debunk spiritualism -- I think it would have made the story -- and her character -- more rich and nuanced.

Sadly, it was the characterizations that kept me from loving this book. Both Wren and her hero, Agent Elliot Matthews, felt thin, as the narrative would pronounce things about the characters without it being demonstrated. I especially felt this for Wren, whom Elliot immediately gloms onto, and it took me almost 125 pages before I warmed to her as he instantly did. (Elliot himself is a bit of a mystery, too, but as he was really a foil for Wren, I didn't mind as much.)

The narrative style was a bit clunky at times, too (As muscles go, Wren's took on a life of their own, tensing in reaction., p141) which kept this from being a favorite.

There's a great Author's Note at the end about Houdini and the inspiration behind Wren's character.

A quick read -- Jazz Age, murder mystery, and a sweet romance, with a very wintry atmosphere -- this book was great for this equally slushy and cold weekend here in Boston.

I'm thrilled to offer a copy of The Illusionist's Apprentice to one lucky reader. To enter, fill out this brief form. Open to US/Canadian readers; ends 4/14. Complete rules here.