Book Review: The One That Got Away by Melissa Pimentel 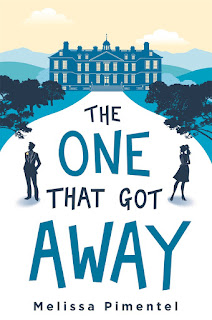 First line: It was Monday night.

Persuasion is my all-time favorite Jane Austen, so when I came across this Persuasion-inspired romantic comedy, I had to have it. It ended up being a very zippy read, super fluffy, the kind of thing you can dip in and out of easily.

Our heroine, Ruby Atlas, comes from a small town in Massachusetts where her father amassed a wealth in real estate. Her sister Piper is high-strung and snobbish. Before heading to her first grown up job after college, Ruby meets Ethan Bailey, son of a mechanic, who bartends at a neighborhood dive. It's instant chemistry between them. But not perfect.

In the now, Piper is engaged to be married, and Ruby is her maid of honor. Only hitch? Piper is marrying Ethan Bailey's best friend, and Ethan is no longer a poor kid from the wrong side of time. He's a billionaire tech inventor, lauded and sought after, and Ruby is in agony at having to see him again. The novel alternates between this story line and that of their time together as a couple.

There's not much more to this novel, and I mean that in the best way. It's comfortable, fun, and predictable, the kind of mindless summer fun I crave now and then. It's not a slavish Persuasion retelling and to be honest, I wasn't entirely sold on Ruby and Ethan, but every character was a hoot. Refreshingly, everyone is genuinely nice in the novel, especially the women. The romantic rivals are sweet and charming, and their relationship with Ruby is normal, friendly, and adult. That's really what left me breathless -- I kept expecting some over-the-top villainy but really, everyone behaved like real people!

So -- summer fluff -- and in this current climate, sometimes we just need silly escape!

Title: The One That Got Away
Author: Melissa Pimentel