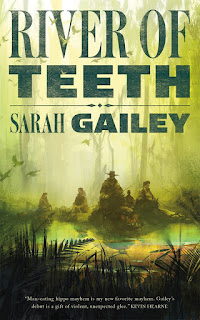 First line: Winslow Remington Houndstooth was not a hero.

I wanted to love this book so badly, and I'm so unhappy that I didn't even like it.

It has all the things that should make it a book I adore -- premise, characters, setting -- but the end result is weirdly flat, predictable, and boring. (It took me about three weeks to push through 120ish pages!)

Gailey's story imagines a US where hippopotamus ranches exist -- the result of a historical proposal that was rejected in our world, but was embraced in hers. The delta of Louisiana is home to hippo ranches and swamps full of violent, vicious feral hippos. A crew of criminals and misfits is hired to do some job (I'm still fuzzy on what it was, precisely, they were to do!) and it doesn't go to plan.

In a nutshell, I don't think Gailey had enough space to really stretch out and run. Everything in this novella smacked of shortcuts and assumption of goodwill, as if the reader has already bought into this ragtag bunch of mavericks and misfits. The characters wing one-liners without demonstrating camaraderie or cleverness; romantic moments felt unearned and tragic ones doubly so. Worse, characters are defined by single characteristics: our plus-sized con artist is French, so she speaks in a comedic accent; our lady assassin is pregnant, so there's lots of belly rubbing and stomach talking, etc.. Even the character I was most delighted by -- a gender ambiguous munitions expert -- basically spends their time being the recipient of Winslow's lavish admiration despite not doing anything other than basking in that attention.

So...yeah. This might be one of my biggest heartbreaks since I've been blogging.