Creepy kids are creepy, especially when they survive plane crashes 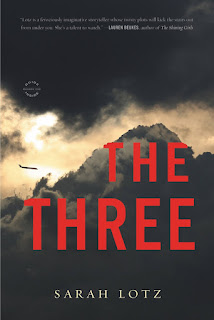 My wife was listening to this on her commute and I got hooked, and we spent the last four nights listening to it at home after dinner while halfheartedly doing dishes and whatnot.

Four airplanes crash on the same day, and unbelievably, in three of the accidents, one child survives. But the world is changed by Black Thursday, as the day becomes known, as the children garner international interest and panic. We learn about what happens through Black Thursday: From Crash to Conspiracy, a book that details the events in the days and weeks that follow, and of course, what happens after this book comes out.

I found the premise suuuuuuuper intriguing and I'm a sucker for found documents/ephemera/books-within-books narrative structure, so all that worked for me; but I did get a bit tired near the end of the drawn out mystery.

My wife said this felt like an overpadded novella; I kind of agree. Maybe in book form, when I could have read faster, it might have raced more, but listening, it did seem a bit like ohmygod, just move faster!!

The two readers for the audiobook were pretty fabulous; their range of accents and voices was impressive (even if, at times, they slipped into different accents).

Unlike some folks, the ending seemed very clear and unambiguous to me; and I'm still thinking about this book. I'm particularly struck by the world Lotz imagined: in 2012, I think I would have found her suppositions a bit overdramatic, but now, well, it all seems a little more plausible...

Unsure if I'll get the "sequel" (Day Four) because it seems even more cool-set-up-without-great-pay-off, but The Three was a pretty fab creepy read for the fall. (And yes, I found it very creepy -- the last few nights I've been jumpy as I've gone off to bed!)