This brief memoir of the internet, art, and harassment broke my heart. I didn't expect that. 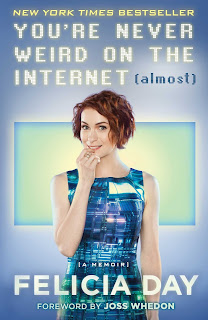 First line: I recently experienced the perfect summary of my career at a Build-A-Bear store inside a suburban mall in Lancaster, California.

I only know Felicia Day from The Guild but I find her so funny, charming, and sweet, so when I needed a short audiobook to listen to while doing chores around the house, I settled on hers. I don't know what I was expecting -- Hollywood gossip, I think? some gossip about kissing Nathan Fillion?!?! -- but this memoir instead felt like a plea for some to understand her humanity.

Which isn't a bad thing, but is certainly heartbreaking.

In these post-Weinstein days, it was impossible for me not to hear it as that. Being an actress introduced harassment into her life (she shares more than one icky story of casting harassment), but her connection with gaming and the "geek" world meant an increase in horrible harassment and threats. When she weighed in on #gamergate, it just got worse.

I'm just a nosy fan who wants to know more about her and her baby (and if she's co-parenting with anyone!) but after hearing about how one fan broke into her house and her address was published online, I can appreciate why she's so secretive.

The opening on her memoir focuses on her childhood, and her "weirdness". I put that in quotes because I honestly don't think she's all that weird; she's got a slightly unusual childhood, but as an Air Force brat, it wasn't unlike that of others I knew growing up. When introduced to the internet, she dove into online games, and found a community there. (Full disclosure: when I was introduced to the internet, at about the same time, I found a community of horse-loving tweens, and spent years writing what I now realize was thoroughbred racing fanfic. Seriously. We imagined we owned the great famous thoroughbreds of history -- occasionally other famous horses -- and wrote stories about our adventures with them. Anyway...) All this to say: her title is accurate.

While she doesn't dish on Hollywood, Day does share a wealth of detail about the making of The Guild and her creative process. (As I'm struggling with my novel, I found these portions so helpful/moving.) She also writes openly about her mental health, too, and the impact illness and depression had on her life. (I just want to smish her.) There was a dearth of tawdry details, which I can appreciate, and yet, I really wanted at least one tidbit about her dating Nathan Fillion. (In the Book Tour section, she addresses this specifically -- she felt weird about sharing stories about famous people she's worked with, which is classy. Sorry I'm vulture, Felicia!!)

Day is the reader of her own book, which is wonderful, because I love her voice. The audiobook comes with a PDF of the illustrations/photos so you can snerk along.

Day and I have the literal same birthday (year and everything), and I couldn't help -- despite her frequent requests to refrain from doing such a thing -- from side-by-side comparisons. Her grit (overused trendy word right now, I know, but it really is one of the things Day has in spades), dedication, and talent are breathtaking.