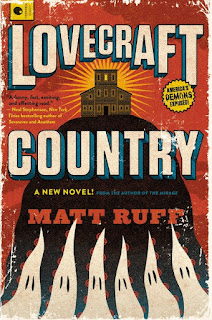 First line: Atticus was almost home when the state trooper pulled him over.

This ended up being my book club's October read, and I'm glad, because it's been on my TBR since it was released last year.

And I'm wicked conflicted about it.

On one hand, this was a really, really entertaining read, a mix of family history and supernatural drama. On the other hand, I struggled (and am struggling) with the author's identity as a white guy, and his depiction of characters of color.

The novel was originally pitched as a tv show, which shows, as it is a series of interconnected vignettes that feels like a tv episode. Which isn't to say it's not good, but it only goes so deep.

The detail Ruff explores most is the repressive violence the main characters face as people of African descent. Which is good, and, brings to mind Kara Brown's piece "I'm So Damn Tired of Slave Movies":

"I’m tired of watching black people go through some of the worst pain in human history for entertainment, and I’m tired of white audiences falling over themselves to praise a film that has the courage and honesty to tell such a brutal story. When movies about slavery or, more broadly, other types of violence against black people are the only types of films regularly deemed “important” and “good” by white people, you wonder if white audiences are only capable of lauding a story where black people are subservient."

Ruff hits all the Jim Crow notes, usually one per episode: arbitrary police violence? Check. Sundown towns? Check. Redlining? Check. Reparations? Check. Which again, hooray, I'm glad Ruff didn't ignore this reality and/but his lingering on it also felt a little too ... look-how-woke-I-am-ish. It felt performative. (At one point, our POC hero refers to himself as a "magical negro" after the villain basically implies it. It was the first thing I was thinking and also felt really really too on the nose having it come from the character, not the least because I'm not sure that phrase was in use in the 1950s among other things.)

Woven within this portrait of life for people of African descent in Jim Crow America is the supernatural, Lovecraft element: a malevolent secret society that needs this family for their nefarious gain. The Lovecraftian influence was pretty minimal, I thought, so those who don't go for "weird" fiction will still enjoy this one. It's atmospheric and creepy, and plays well with the real life tension, leaving the reader to stress whether it's the monster that's going to get our heroes or the local police.

There's always a lot of disagreement about what writers can write about and I can't say I know the answer. But to paraphrase Justice Potter Stewart, I know when it feels right, and this didn't quite hit me right. (In spirit of balance, Alex Brown, who identifies as a person of color, liked this book and dismisses apprehensions of Ruff's identity, so don't take my opinion too seriously!)