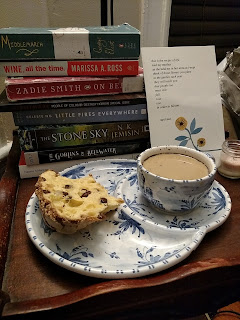 I can't believe it's been so long since I've updated but I've been felled by a four-week cold that has just really started to clear up. I'm able to sleep through the night with only one bad coughing fit, and while I've lost my voice, I'm not barking like a sea lion every fourteen seconds. Whew!

With great help from a woo woo mystical Facebook group, I've decided to settle into the late fall/winter season and embrace it rather than dread it. Toward that end, I've tried to hygge up my life with coziness and what not. Last night, I pulled out a cup and plate set I bought while on a trip to Savona, Italy years ago (and forgotten about until I found them again), and I indulged in some panettone cake and coffee with my reading.

I'm about a third through Picnic at Hanging Rock, and the only reason I'm going slow is that I'm seriously lingering. I bought the audiobook and am listening to it, but I'm also concurrently reading it. The language is that good:

With her high-piled greying pompadour and ample bosom, as rigidly controlled and disciplined as her private ambitions...

Insulated from natural contacts with earth, air and sunlight, by corsets pressing on the solar plexus, by voluminous petticoats, cotton stockings and kid boots, the drowsy well-fed girls lounging in the shade were no more a part of their environment than figures in a photograph album, arbitrarily posed against a backcloth of cork rocks and cardboard trees.

I should speed up my reading as I'm ten books away from hitting my 2017 reading goal, and I'd really like to finish Middlemarch before the new year.

Anyway -- a midweek update of nothing much. What are you reading right now?
weekend reads zero real content