Never has a Victorian-era picnic been so chilling, bittersweet, and shocking 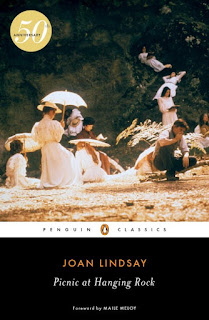 First line: Everyone agreed that the day was just right for the picnic to Hanging Rock -- a shimmering summer morning warm and still, with cicadas shrilling all through breakfast from the loquat trees outside the dining-room windows and bees murmuring above the pansies bordering the drive.

This book. This book!

It's a slim read but one I dragged out over two months because I savored each line. It's a surprisingly bittersweet and chilling read about the aftereffects of a tragedy; in this case, the disappearance of three students and a teacher during a school picnic.

Opening on Valentine's Day, 1900, at a posh girls school in Australia, the novel spans three short, but devastating, months following the strange disappearance of three beloved students and a teacher at Hanging Rock, a local rock formation. The survivors are impacted in varying ways, from the school's steel-spined headmistress, Mrs. Appleyard, and her attempts to keep her school functioning, to Mike, a British transplant touched by friendship with a working-class

Lindsay's prose is stellar. She's just vicious and no one, from Mrs. Appleyard -- ...her high-piled greying pompadour and ample bosom, as rigidly controlled and disciplined as her private ambitions... -- to the sibling of one of her employees -- ...dank, pompous and half-baked...holding Views and Opinions on every subject under the sun from Female Education to the incompetence of the local Fire Brigade. -- is spared.

Lindsay makes this story sound as if it's based on a true story, but it's wholly fictional. Still, I was invested in discovering what happened to these girls, caught up in the ripples of pain and terror caused by their disappearance. (Unseen, unrecorded, the pattern of the picnic continued to darken and spread.) Bittersweet realism mixes with the utmost melodrama, and I loved every letter.

This edition was released for the book's 50th anniversary with an introduction by Maile Meloy. As with most introductions, read it after reading the book, for Meloy discusses plot points as well as Lindsay's what-really-happened chapter that was published later. (I agree with Lindsay's editors: it doesn't add anything to the story, and actually detracts from the oomph!) The jacket copy compares this to Shirley Jackson and Rebecca and the comparison is spot on: feminine, fierce, and unforgiving.

One million stars. I bought the audiobook to have a reread over the winter break! (It's going to make my Top 10 for this year.)