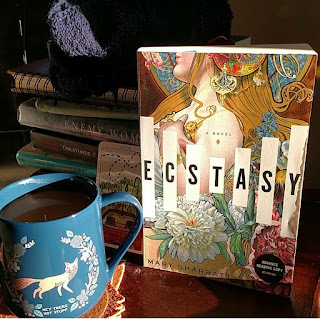 I knew, from the previous novels of Sharratt's that I've read (the astounding Illuminations and fascinating The Dark Lady's Mask) that I would love Ecstasy -- even though I feared the story of Alma Mahler's life would frustrate me. However, I should have trusted that Sharratt would somehow manage to make me not just enraptured of/with Alma but also the people in her life, including the frustrating Gustave Mahler.

Alma Schindler is beautiful and clever, growing up in Vienna's glittering world of art and intellect. She composes and wishes to devote herself to music, but aspires to a passionate love as well. She eventually marries Gustave Mahler, a genius who demands she give up her composing and devote her entire self to his art. The cost, unsurprisingly, is enormous.

This probably sounds miserable, but Sharratt somehow manages to make it deeply compelling and kind of understandable. In this time of Lean In and #hustle, Alma's frustrated struggle resonated with me; the compromises she made I could appreciate. Sharratt's portrait of Alma is empathetic and sensitive, as are the other figures in Alma's life -- including Mahler.

As with her previous novels, Sharratt's skillful narrative creates sense of place and era in a vibrant but unobtrusive manner. So much of who Alma is comes from her life in late 19th century Vienna and the story combines Alma's inner world and emotional turmoil with a glittering swirl of parties, concerts, and exhausting hikes (thanks to Mahler). I might not have wished to live the life Alma did, but I understood how and why she made the choices she did.

Alma is a divisive figure among Mahler fans (there's an "Alma problem", apparently) but I couldn't help but think of the current revelations from Hollywood that many a "difficult" actress was actually a woman who refused unwanted sexual advances. Sharratt offers another so-called "difficult" woman a new narrative, one that I welcome. (And, as Sharratt says in her interview with me, "Alma totally passes the Bechdel test!" which is another welcome narrative: women as inspiration, colleagues, friends, and allies rather than competition.)


What if there are no good women or bad women? she asked herself. What if pure and impure, faithful and loose, madonna and whore were simply poisons used to reduce a healthy woman to a gibbering, nerve-sick wreck? Men make the rules and we break them so we don't go mad. (p381)