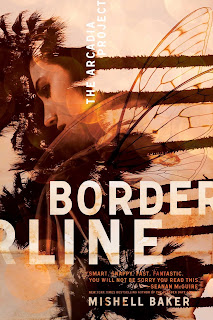 First line: It was midmorning on a Monday when magic walked into my life wearing a beige Ann Taylor suit and sensible flats.

I'm afraid I'm not going to be able to adequately write about this book because it's quickly become one of those reads that has merged a little with my DNA. How do you reasonably talk about a book like that?

An inventive urban fantasy, this novel features a heroine who has Borderline Personality Disorder (BPD) and is a double amputee. Languishing in a psychiatric center after a failed suicide attempt, Millie -- once a promising film director --is invited to join the Arcadia Project, a mysterious organization that manages relationships between this world and the fey.

Baker's writing is wonderful: with the Los Angeles setting and our cast of misfits, there's a noir-y feel to this urban fantasy that makes it read fresh and fast.  Baker manages to do some incredible world-building in a deft, readable manner; even though our heroine was new to this world, too, neither of us were subjected to info dumps. And while there were moments when I had to sit impatiently for the reveal, it was in a good way, not in a sloppy writing way. This book had all the emotional elements I want in a compelling read -- romance and desire, intrigue and double cross, sense of place and landscape -- but nothing manifested in an anticipated way.

Meeting Millie, as it were, was a lightning strike for me. At the risk of oversharing, my experience with BPD has been limited and I've only had a vague understanding of it and how it impacts me and my behavior. But Baker's articulation of BPD -- including treatment -- was so illuminating, it literally introduced me to things that therapy hadn't and reassured me that the rough parts of myself that I despise need not be hated. Millie is a deeply imperfect and flawed heroine who makes for compelling reading and her missteps and corrections reassured me that I can be okay despite my own failings.

I actually listened to half this book as an audiobook before diving in and reading, and the audiobook production is great. I actually still hear Arden Hammersmith, the audiobook narrator, in my head while reading certain characters.

Although the first book in a trilogy, this one has a great ending that closes up plots so you need not be on the hook to read the next two books -- but you're going to really, really want to. I selected this as my book club's September read and at least two members went out and read the remaining two books immediately upon finishing this one, they -- like me -- were hooked on Millie and her world.