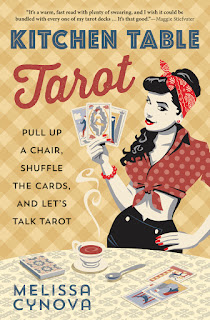 This book reignited my love for tarot.

I bought my first tarot deck at 16 or so, and have been passionate about tarot since then. But after twenty years of reading (and heavily collecting), I found I wasn't turning to my cards as much. Partially it was being pregnant, and then having a kid -- many, many things in my life slowed down -- but a good deal of it was feeling in a rut and at a dead end. I 'knew' the cards, as much as I could, but I wasn't using my decks regularly or reading for anyone -- including myself.

On a whim, I requested this book via NetGalley, and to my surprise, actually read the e-book galley cover to cover -- yes, including every page for every card. Cynova -- popularly known online as Little Fox Tarot -- has a wonderfully down-to-earth and accessible attitude that immediately drew me in, and her every thought on tarot and reading (or card slinging) is approachable, welcoming, and realistic.

From the first page, Cynova's personality comes through her writing, and true to the title, this book reads like a convo between her and the reader. She offers her thoughts on reading -- ethics, when not to read -- as well as discusses the "rules" often associated with tarot. Like me, Cynova believes tarot is a tool anyone can use and isn't magical (although, of course, one can have many brilliant flashes of insight via tarot!).

Cynova's card interpretations were what really sold me on this book, and I turn to this guide daily. She grounds her thoughts in the card's traditional design, symbols, and elements, but uses her own considerable experience to expand or illuminate an aspect. She also does reversals (woot!) and organizes the book by number rather than by suit (so all the twos are together, etc.).

For the heavily traditional, Cynova's irreverent interpretations might cause some pearl clutching, but I find them positively refreshing.


Okay, so the guy stole your swords. That was a jerky thing to do, but we're going to give him the benefit of the doubt and let that stuff go. Release it. Honestly, it's just weight you down. (from Five of Swords Inverted)

My final proof of this book's fabulousness:  I've purchased three copies of this book -- one for myself, two for others -- and I think it numbers among my top five all time favorite tarot guides.

If you're new to tarot, absolutely get this book. If you're an experienced reader, I still think there's a great deal one can learn from Cynova. And for me, a year after this book first crossed my path, I'm back to having a vibrant, personal tarot practice.

Note: I've started a new tarot blog (Unabridged Tarot) and I've posted my review there. Be sure to follow it for more nerdy tarot talk.