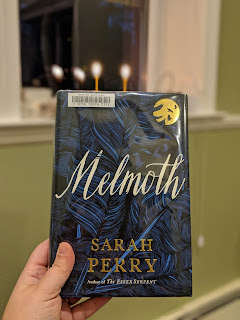 Oh my friend, my darling—won't you take my hand? I've been so lonely!

I told my wife this book reminded me, in a way, of the tv show, Hannibal. Not because of any actual plot similarity (Perry's novel is devoid of serial killers) but more in the opulent, baroque, and ominous style in both.

It's extravagant. Melodramatic. Wuthering Heights and mezzo-sopranos dying on stage. Tea-and-rainy-day moody. A bit like Byatt's Possession, only far more brief. It has all the atmosphere and setting of a book I love, so I'm especially crushed that I didn't love it!

Inspired by a Victorian novel about a man named Melmoth, Perry instead imagines that Melmoth is a haunted woman who sees people's sins and invites them to spend eternity with her. Helen, ex-pat in Prague and suffering self-imposed punishment, learns about Melmoth from a friend, who learns about Melmoth from a friend. An urban legend of sorts, only Helen is handed a variety of documents that describe interactions with Melmoth.

It was the stories within the novel that most gutted me, Helen's in particular (I don't think I'll be able to forget it). But I was expecting so much more from the novel the Guardian said was "one of the great literary achievements of our young century."

In the end, I can't say I understood why. Why Melmoth, of all the stories to retell? Why make Melmoth a woman? Why didn't she feel more haunting and scary? Why did it seem so easy to resist her? Why a barrister character that did no pleading nor arguing in a book that seemed all about right and wrong? (I've a few more whys but sharing them will spoil the plot!)

I expect I missed all that was brilliant and landed with all that was easy. Still, what was easy was interesting -- stay-up-late-to-finish compelling -- but not a favorite (unlike her previous, The Essex Serpent).
* book reviews book rating - liked