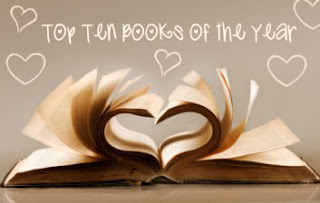 It looks like I've read 33 books this year, which is five less than last year. But given the crazy amounts of stress and drama that hit me in 2018, I'm frankly delighted with this count.

Three of my reads were for my book club (Things Fall Apart, Borderline, and The Changeling), which is embarrassing since we've done 9 books for the year and I run the club!

I achieved a wopping zero on reading challenges, which I aim to change in 2019. Mostly by committing myself to two (Read Harder and Historical Fiction) and really diversifying my reading. And reading more, you know, than I had this year. (Re-frame: This year I knit 8 items, which is a 2000% improvement over other years. So, small perk of reading less!)

And for this top ten...I'm actually really only able to commit myself to nine. They're a mix of delicious escapism and butt-kicking reality. (Sadly, I've only reviewed 3 of them, altho I do think I have kneejerk thoughts for each on GoodReads.) What made your top 10 this year?

Borderline was a book club pick, but I ended up inhaling all three books in the trilogy. The premise and world-building were great, but Baker's characters are the real hook. Seen as damaged goods, with a variety of mental health diagnoses depicted, the people of Baker's novels are impossible to ignore. Obsessed with these three!

I snagged this audiobook as background for my novel, but I found it to be a remarkably timely listen for me in 2018. McPherson's essays illuminated small facets of the conflict that was eye-opening to me and translated into an understanding of contemporary politics, even (his chapter on how the Civil War has been depicted by Southern scholars gave me some real ah-has as to why the 'fake news' sentiment is so broad and easy for many to embrace). For someone who is a total dum-dum about the Civil War, this was an easy, fascinating listen.

A catnip read for me: gothicky and creepy, haunted house-ish, possessed items, atmosphere and mood... I still get shivers thinking about this one!

I read this volume of essays as part of professional development, but the takeaways for me went beyond work and greatly helped me in shifting my thinking. While focused on Unitarian Universalists ministers of color (and one religious education professional), I suspect the themes and reflections shared would have universal resonance and implication for anyone interesting in dismantling white supremacy culture.

2018 was my introduction to m/m historical regency romances, and thank goddess, because these were a balm when I was just unhappy, miserable, or at my wit's end. Sebastian has become an insta-fav in our house, and this book might just be my all-time fav of hers. Adorable leads, with a sexy, probable romance, enough historical detail to give it flavor and enough plausibility to make it seem real-ish without having to deal with homophobia and tragedy. Sexy, sexy fun.

This final book in VanderMeer's Southern Reach trilogy was incredible. It wrapped up things as clearly as possible (as clear as VanderMeer offers) and presented some gorgeous, gutting emotional moments. It's so good I wanted to reread the series again.
* top 10