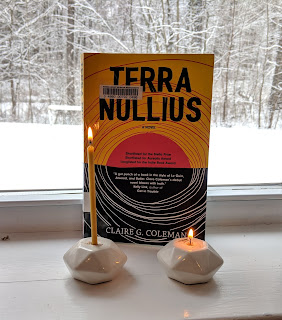 Terra nullius -- "empty land" -- was the doctrine with which white Europeans used as the basis for invading Australia. It was codified into Australian law until the 1990s, but the impact is still felt.

A society based on dominance, genocide, and colonization can only respond in certain kinds of ways.

Coleman's novel takes us to colonized Australia. Those who remember the invaders -- now the Settlers -- are grandparents; at least two generations have been born into a world of subservience and oppression. As when I first read Margaret Atwood's The Handmaiden's Tale, I struggled to understand if I was reading the past or the future; either possibility felt real.

It took me about 120ish pages to really get into this book; Coleman's opening felt a leeeetle too drawn out for me (it was crushingly oppressive) but established two of the major characters and primed us to pin all our hopes on the escaped Native Jacky. When Coleman revealed the background to how Australia ended up where it was, I was completely hooked.

Coleman is an Indigenous writer from Australia, and her love for her home is evident. She was traveling Australia as she wrote this book, and the descriptions of the land are vivid and warm (even when the Settlers look at it with disgust, Coleman's admiration shines through).

This is another read for Read Harder 2019 and one that I likely wouldn't have picked up if it weren't for the challenge. But I'm glad I did; this one will stick with me.
* book reviews book rating - okay