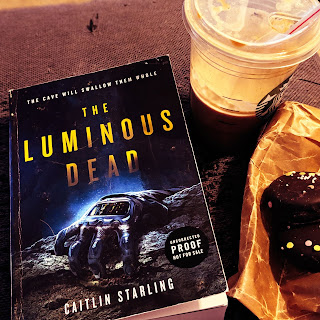 Words flashed up on her cracked screen.

Gyre choked down the faint, nascent sound that threatened to leak from her throat.

The words on her screen disappeared, and were replaced with:

IT HEARD THE SINGING. IT DOESN'T LIKE HUMAN VOICES

I won this book via GoodReads' First Reads and I really had no idea what it was about; but I loved the title and the cover so dove right in. What I landed in was a creepy, claustrophobic thriller pitting/partnering two damaged people in a place determined to kill them.

Starling doesn't waste time plunging us (literally) into her world, an alien place where mining dominates but some kind of alien known as Tunnelers make it dangerous. Cavers identify lodes -- if they survive the Tunnelers -- and a good caver can make lucrative money surviving one or two expeditions. Surviving being the operative word.

Gyre is desperate to leave her home planet to find her mother, who abandoned her as a child; she risked everything to land this mysterious, dangerous, highly paid job. Quickly, we see things are not as expected, but even Gyre doesn't know what is standard. The novel devolves into a mire of paranoia and barely contained panic, infectious and so very, very fun to read.

There are alien monsters, possibly unreliable narrators, horrifying realities or maybe terrifying delusions. It's impossible to tell what's real and what isn't, and I loved every moment.

Bonus is that Starling's world isn't white and straight!