July 08, 2019
Lying is a disgusting habit, and it flows through the conversations here like it's our own currency. The cultural disease here is what we should be curing... 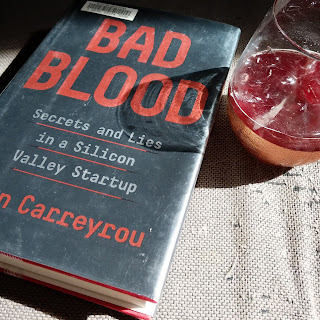 I've been fascinated first, and horrified later, by Elizabeth Holmes and Theranos, and couldn't fathom this book detailing anything I hadn't already read. HA. Carreyrou shares the details behind his fantastic Wall Street Journal reporting, including the shocking lengths Theranos took to silence him.

Expanding on his exposé of Theranos, Carreyrou briefly details Elizabeth Holmes' background and her founding of Theranos. The sketchy details that mar the beginning of this endeavor are presented as they develop, and it makes this story even more astounding/horrifying.

This book is very readable despite the science behind it (or science allegedly behind it, I suppose) although I was occasionally lost among the plethora of people to keep track of (since Holmes/Theranos fired people like it was going out of style). But Carreyrou makes real and human the people who were chewed up and spit out by the Homes/Theranos machine. (Including folks who are probably otherwise pretty unappealing.)

Missing from this was Holmes' voice -- Carreyrou asked to interview her for the book, and she declined -- and as a result, there is this huge hole of "what was she thinking?" that can't -- and doesn't -- get answered. It's frustrating because you just can't believe the decisions folks make in the face of what seems like damning evidence. Just hearing over and over how charismatic and compelling Holmes is/was doesn't convey the how/why.

I'm looking forward to (so to speak) Holmes' upcoming trial so that I can hear her thoughts, although I imagine it'll be pure BS. The portrait Carreyrou painted is of someone seriously, seriously *something* (because I don't know what armchair diagnoses folks are giving her) but whatever it is, it's intense. Even more chilling is a portrait of venture campaigns, the desperate desire to monetize health care even more, and the immense power -- through money, access, and/or reputation -- some people wield (and wield recklessly).

Another read I wouldn't have picked up were it not for Book Riot's Read Harder 2019 challenge; this covered my nonviolent true crime (but could also cover a book by a journalist).