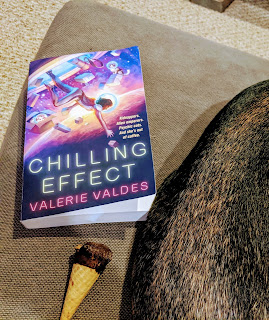 Before she could shoot, a familiar voice boomed from the loudspeakers. "Attend me, worthless muck-eaters. I have come to your inferior outpost to apprehend the human captain Eva the Innocent!"

I erroneously described this as Firefly with a lesbian Mal; but I was only wrong about our main character's sexual identity (pansexual, maybe?). Otherwise, this marvelously fun comedic sci fi takes the best part of shows like Firefly, with a charming crew and a "curmudgeonly" "anti-hero" captain (who is both adorable and heroic), and injects welcome imagination into the ragtag-posse-take-on-enormous-challenges plot line.

Captain Eva Innocente loves her ship, La Sirena Negra, and her work: running cargo and passengers around the universe. The book opens with Eva struggling to recapture her most recent order -- a passel of psychic cats -- and so, by page 3, I was literally enamored of everything about this book. That the characters continued to be charming, funny, and interesting -- her sweet, concerned engineer Vakar and her tough and badass doctor Pink (who gave me serious Gina Torres-as-Zoe vibes) -- as well as the secondary folks, like the completely bananas fish-faced emperor who is obsessed with adding Eva to his harem.

Adding to this delightful chaos is the very serious problem Eva is trying to solve without involving her crew: a twisted, murderous syndicate known only as The Fridge has kidnapped her sister, and Eva must do dirty deeds for The Fridge to free her. Valdes is marvelous at sketching a vibrant universe without tons of clunky exposition or infodumps, and the story races along with some serious emotional backbone to it. It's funny and bittersweet in equal part. And it's not a world of white humans and various aliens, which is even more refreshing!

This will be the first book in a series, but it ends very satisfyingly, so don't be fearful of a frustrating cliff-hanger. But pick it up for nostalgia of Firefly or for a Guardians of the Galaxy readalike. Intergallactic adventure, conspiracy, and a teeny tiny bit of a romance: yum!