The First Lady and the Rebel by Susan Higginbotham 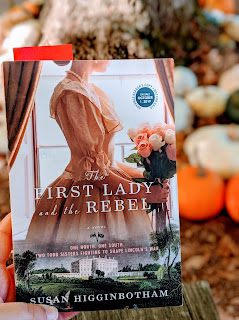 "But you were right, in one respect. Those bullets made us what we are."

The First Lady and the Rebel by Susan Higginbotham
Sourcebooks Landmark, 2019
Source from publisher on behalf of blog tour
Reading Challenge: Historical Fiction

From a Kentucky slaveholding family, the Todd siblings were bound to be torn apart by the Civil War, but moreso when headstrong Mary sets her sights on the humble Abraham Lincoln and Emily on dashing Hardin Helm. Higginbotham shares both stories with a tender sympathy, even with both women behave in petty or cruel ways. Initially both families were friendly, with admiration between Abraham Lincoln and Hardin Helm, until war forced sides to be chosen. In Higginbotham's hands, Helm sides with the Confederacy because of honor -- a vague declaration that results in my only real quibble with this book.

For good and for bad, Higginbotham avoids delving deeply into the personal beliefs of either Todd sister, especially Emily; so as the war rages, it was hard for me to understand why Emily behaved as she did. The Todds found themselves as oddities in Kentucky where most of their neighbors were pro-Union, and it's probably safe to assume that meant they were devoted Confederates. I think it's hard to make the values of the Confederacy palatable, and so Emily's philosophies and attitudes are presented in what felt to me as a watered down manner. But even Mary felt at arm's length at times: it was unclear to me when her feelings about abolition changed, for example, or if she was always in favor of the choices Pres. Lincoln made.

The Civil War is a gripping and terrifying setting for any novel, and Higginbotham evokes the horror well, especially when both Mary and Emily were distant from much of the blood of battle. Constrained by history, Higginbotham manages to find ways to share the emotional bond between the sisters, including the affection their spouses had for each other, and the liberties Higginbotham takes in her story are realistic (and detailed in her Author's Note).

At 400 pages, this book could feel like a brick but it fairly races; and Higginbotham nails the important emotional moments. I teared up when both sisters lost their spouses, and their eventual reunion was bittersweet. I was curious how Higginbotham would handle the rumored 'insanity' of Mary Todd, and she did so in a way that was deeply satisfying.
* book reviews book rating - liked