Showing posts from November, 2019
Show all

The Poppy Wife by Caroline Scott 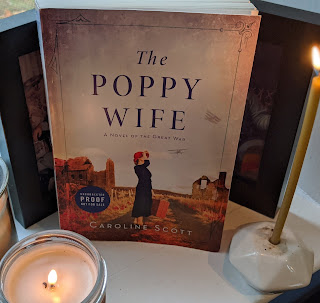 Was it so wrong to feel that she had been treated unfairly? That she'd been judged and damned and had not had the right to defend herself? I stayed up until 1am to finish this novel, set in 1921, following a veteran and a widow of World War I. It had shades of Graham Greene and Alfred Hitchcock, too: a vague menace stalking our main characters, who were trying to find peace in a Europe looking to neatly memorialize what had happened. The Poppy Wife by Caroline Scott William Morrow Paperbacks, 2019 Review copy from publisher for blog tour Historical Fiction reading challenge I've mostly given up novels set in eitherWorld War I or World War II; I'd read so many that I was feeling like I was getting the same thing over and over. This is Caroline Scott's debut novel, and she manages to not only create a story with the hold-your-breath tension of a domestic thriller, but she also brilliantly (tearfully) evokes the terror and horror of trench combat. Edi
6 comments
Read more

The Art of Escapism Cooking by Mandy Lee 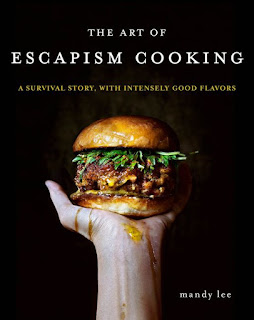 Look, the only thing I'd like to cook at seven in the morning -- as I lie in bed with residual resentments from the day before and looming despair about the day ahead --is the people who say they love cooking breakfast. Who are these people? I imagine their breakfasts taste like denial buttered up with overcompensating enthusiasm. Cookbooks are so much more than lists of recipes anymore. Some are really just about the pretty pictures or the personality of their author. Many are attempts to catch a popular trend, usually of the 'diet' variety. Mandy Lee's cookbook might have mouthwatering pictures and a strong sense of her acerbic personality, but it's also a travel memoir, a biography, a Dear John; or, as the subtitle succinctly summarizes: a survival story. I'm not sure I've ever really found myself thinking about how well a cookbook meets a political moment, however, until this one. (Which is a shame, because food is so much a part of cultur
4 comments
Read more 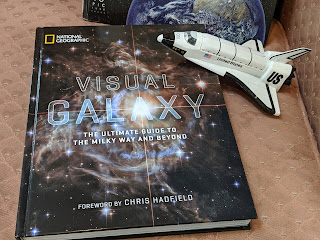 Our burning desire to take those first wobbly steps is rooted in our need to go see for ourselves, to taste and touch the world around us. We learn by exploring. , from the Foreword by Col. Chris Hadfield Of the million reasons I love being a parent to Unabridged Kid, one of the biggies is his hunger to know and learn. Seeing his joy, his awe, and his delight as he discovers something about the world around him is a pleasure I can barely express. Which is why I am so loving these gorgeous coffee table books from National Geographic. Visual Galaxy National Geographic, 2019 Source from the publisher for blog tour Earlier this year I gushed about my sentimental attachment to National Geographic; I'm grateful that they are still sharing the beauty and mystery of our world and beyond. The Foreword from Col. Chris Hadfield is a short love letter to everyone inspired by the sky and what is just past what we can see; I'm a Hadfield fan already but his brief introduction
4 comments
Read more 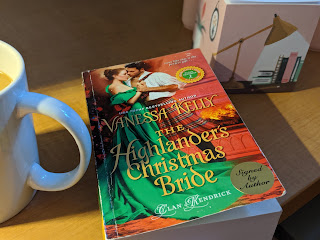 "Don't think too long, because you're not that charming," Nick said. "She just might choose a nunnery, after all." Despite my love of romances, I've somehow never gotten onto the Christmas romance train, which is odd because I do love Christmas movies (although I am firmly against Love Actually as either a sentimental holiday tradition or a movie to be liked; but I also believe both Die Hard and Bridget Jones's Diary are Christmas movies so take what you will from this.) All that to say: Vanessa Kelly's newest has me thinking I need to do some Christmas-themed romance deep diving immediately. The Highlander's Christmas Bride by Vanessa Kelly Zebra Books, 2019 Copy from the author for blog tour Historical Fiction reading challenge While the plot is familiar -- seemingly-doomed-to-spinsterhood heroine meets brawny bachelor; both smother their interest in the other; random occurrence forces them to consider marriage to save repu
2 comments
Read more
More posts