Book Review: Love Her or Lose Her by Tessa Bailey 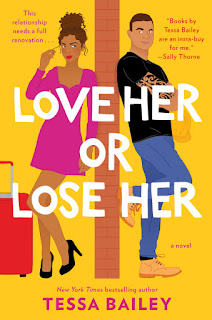 Was this a sign that she was ready to shed him like a layer of old skin and move on?

At this point, I think this is my seventh Tessa Bailey romance and I'm sad to say I really think I'm just not the right reader for her books. This book is the second in her newest series, Hot & Hammered, set in Port Jefferson, Long Island, centered around the Castle family and their home renovation business.

Love Her or Lose Her by Tessa Bailey
Avon, 2020
Copy from the public library

Dominic works on the construction crew and is married to his high school sweetheart. But after a decade together -- including the time he served in the Marines in Afghanistan -- things with his beloved Rosie are stilted and tense. They never talk, his wife's emotional life is a complete mystery to him, and he firmly believes that acts of care, done in secret, is the only way for a husband to behave. For Rosie, she feels like a shadow in her own life, her dream of own a restaurant drifting further and further from sight with each day. Despite the insane sexual chemistry between her and Dominic, they seem like strangers, and one day, Rosie demands they make a change: seeing a marriage counselor.

I was so intrigued by this premise and in many ways, Bailey delivered: she really nailed a marriage that wasn't working but in really tame, boring ways. There was no huge sin or betrayal that caused things to suddenly be cold between Rosie and Dominic; they just stopped being friends. (They were weekly fuck buddies which I guess is realistic but their sexual chemistry was so over-the-top it was almost gross. Like, no one who has sex weekly really needs to be getting panty-sopping horny from her husband's voice.) The things Rosie and Dominic had to do to repair their marriage was realistic and normal and quite touching.

But this was actually a small kernel of the story and the rest of it was just, I don't know... At this point, I think Bailey's narrative style just doesn't work for me. It just feels like she's so fond of her characters she's too precious with them, or too indulgent, and it feels like she assumes the reader is as in love with them as she is. And I'm not, so most of what they do just makes me roll my eyes rather than cheer.

And the "alpha" hero element ... UGH. To each their own but it's 2020 and I really don't think it is at all appropriate, cute, funny, sexy, or appealing for one romantic partner to chase down the other partner when they're having a night out with their friends. Rosie asks for a girls night and they all dress up and go to Manhattan and it's Wes -- the outsider and apparently romantic lead in the next book! -- who suggests all the guys chase down the women, which is pretty horrifying, but especially so since he isn't actually in a romantic relationship with any of these women; and in fact has only insulted the woman whose night he plans to ruin.

Our hero's endearment of 'honey girl' really just made me cringe. Bailey has her heroes use 'baby girl' a lot (which I loathe) and/but the use of 'honey' here felt a little like exoticising Rosie since she's biracial (Black and Latinx). Like, why not just keep using 'baby girl'?

Unlike Bailey's other series I've read, I do think reading Fix Her Up is needed before reading this one; there's actual character development from that book that happens here, and I think it would be meaningless without having read Fix Her Up; there's also a decent amount of groundwork being laid for the forthcoming novel featuring Bethany (like, it's a tertiary thread that has gotten multiple page treatment!).